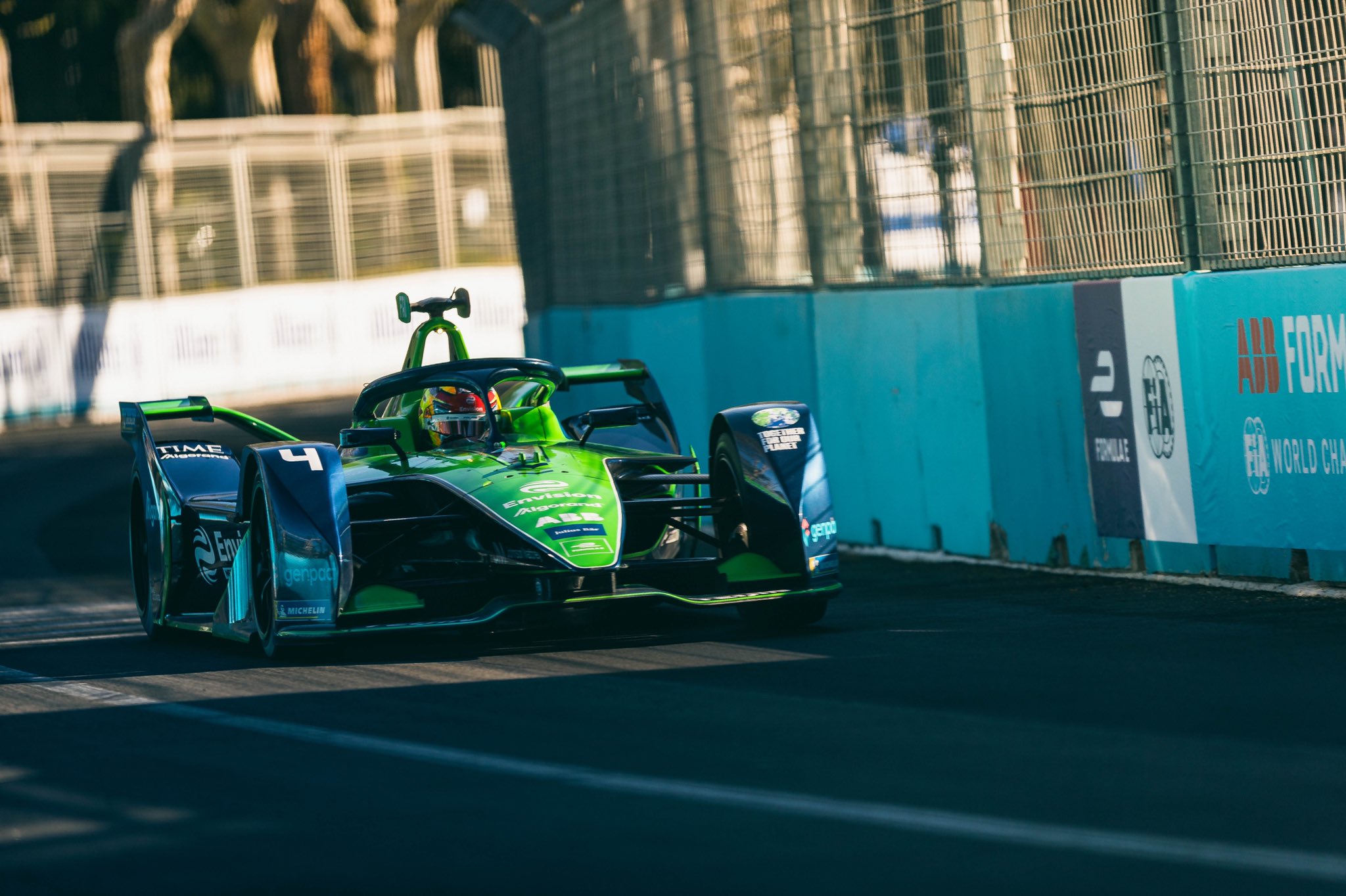 ROME RECAP: TWO PODIUMS PLUS TWO FASTEST LAPS AND THE TITLE CHALLENGE IS ON

Robin Frijns led the charge for Envision Racing in Rome, taking two podiums and showing race-leading pace, but there was plenty more to be happy with in the Italian capital

Formula E returned to Rome for a double-header, with thousands of fans in attendance, and both Envision Racing drivers showed great speed, with last year’s championship hopeful Robin Frijns in scintillating form.

Both Frijns and team-mate Nick Cassidy had reasons to be cheerful after a memorable weekend of racing in Rome, with Frijns leaving Italy and heading to the next race in the storied surrounds of Monaco just two points off the summit of the championship.

Matching a feat already achieved this season, Frijns really hooked it all up in qualifying for both races in Rome. Running in Group A qualifying for Saturday’s round four of the ABB FIA Formula E World Championship, the Envision Racing man was superb, dispatching Porsche driver Andre Lotterer in the quarter-finals and beating reigning champion Nyck de Vries in the semi-finals.

In the shootout for pole position, Frijns couldn’t quite beat Stoffel Vandoorne, but lined up second for the first E-Prix of the weekend, and the following day followed up strong practice pace with another great turn in qualifying. Once again Frijns made the knockout stages, but was eliminated in the quarter-finals, lining up sixth for the weekend’s second race…not that it hampered his race prospects…

Frijns in front!! He follows up his overtake by protecting his lead and takes his 1st Attack Mode 🙌 pic.twitter.com/0CUIK1mMK2

Last season, Frijns managed to show speed and consistency to remain in the hunt for the Driver’s title right up until the final two races of the season despite not winning a race. This year, Frijns has already showed a continuation of those skills, with an added sprinkling of aggression, and some masterful overtaking.

From his second place grid slot in the weekend’s first race, Frijns engaged in a race-long duel with the Mercedes of Vandoorne, pulling of four perfect overtakes on the Belgian driver, and working with his team in the pits to execute a perfect Attack Mode strategy which saw him maintain track position and battle for the win, ending up second to Jean-Éric Vergne.

That elusive E-Prix victory is getting closer…

Despite starting from sixth, Frijns played a waiting game in the second E-Prix of the weekend, in a race that took a while to come to the boil, but when it did, a classic Formula E contest emerged.

In a safety car punctuated race and some more breathtaking overtakes from Frijns, the Dutch driver once again managed his Attack Mode options well to move into the lead of the race with 15 minutes remaining on the clock, only to be passed by Lotterer who had a slight Attack Mode advantage and more energy available.

Crucially, Frijns kept in touch with the top two throughout the closing stages, and managed to power past Lotterer to take third place before a late safety car resulted in a one-lap dash to the chequered flag, and in the end a comfortable third place for Frijns, plus fastest lap, to confirm that the Audi e-tron FE07 is a rapid machine.

CASSIDY SHOWS KIWI FIGHTING SPIRIT ON THE STREETS OF ROME

We’re dedicating our #mondaymotivation to Nick Cassidy’s monumental drive in Round 5 of the Rome E-Prix.

The speedy Kiwi managed to move through the field from P18 to P6!!! He showed amazing pace and there’s plenty more to come 💪🙏 #RomeEPrix #FormulaE pic.twitter.com/Gopw9dfAB4

The qualifying fortunes of Envision Racing’s Nick Cassidy did not tell the story of the New Zealand driver’s Italian weekend. Ending up a 14 on the grid for race one, Cassidy underlined his rapid pace shown throughout practice to battle his way to ninth, bagging vital points, as well as taking the fastest lap of the race for the second time in four races.

Sunday’s E-Prix saw another cracking recovery drive from Cassidy, who couldn’t quite get it together in qualifying, but certainly got things all hooked up when the lights went out. Starting 18th, as all eyes were on the frantic race for the top three, but further back Cassidy managed to work his way up 12 places to slot himself into sixth as the race approached its climax.

Sadly, more points were not to be for Cassidy and the Envision Racing team, as it all ended in the barrier after he was shunted from behind, and despite rejoining minus his front wing. It was a cruel end and no reward for a landmark performance from Cassidy, but there’s plenty of positives to take to the next race in Monaco.