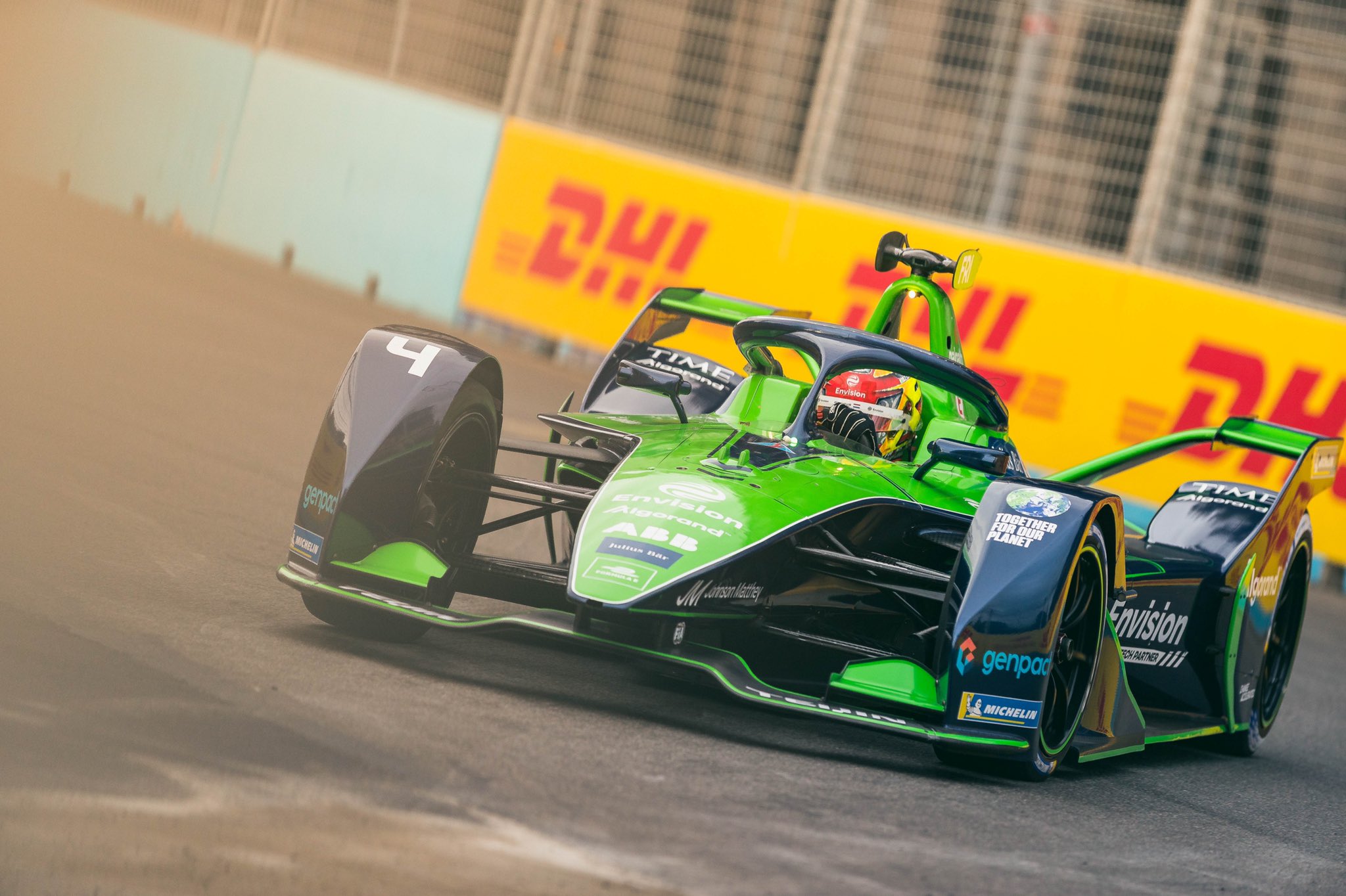 FRIJNS CLAIMS A SENSATIONAL SECOND FOR ENVISION RACING IN ROME

Envision Racing’s Robin Frijns was fighting at the front in the first race in a double-header of Formula E racing in Rome. Starting from second on the grid after an impressive qualifying, the Dutch driver made not one, but four stunning overtakes on Stoffel Vandoorne, and combined measured Attack Mode tactics and calculated energy management to finish second.

Frijns was spellbinding in the first phase of qualifying, putting in a sensational lap in Group A qualifying to advance to the knockout phase with the second fastest time, where he would face Andre Lotterer.

Frijns dialled in a stunning lap, making light work of the Porsche driver and progressing to the semi-finals of qualifying for the second time the season, and lined up behind fellow Dutchman and reigning champion Nyck de Vries.

In the head-to-head, Frijns was majestic. Booking himself a first appearance in the final of qualifying and seducing a front row start. The big question was, could he cap a stellar qualifying in Rome and bag pole position?

The answer was no, and despite a valiant lap, a slight, but a spectacular sideways error cost Frijns a few vital tenths, handing pole position to his rival Stoffel Vandoorne, but ensuring a front row start for the afternoon’s race.

As the race got underway Frijns challenged for the lead, only to be forced to hold station behind Vandoorne, as behind it all kicked off with cars strewn across the track, allowing Frijns’ team-mate Nick Cassidy to slither through the gap and move up from his qualifying slot of 14th to gain a place.

A full course yellow followed by a safety car halted the frantic early-race action, with Frijns sandwiched between leader Vandoorne and compatriot de Vries. With racing back underway, Frijns piled the pressure on Vandoorne before settling into a waiting game, keeping the leading car honest.

Frjins hit the front as the race entered its final 30 minutes with a measured pass on Vandoorne braking into Turn 4, as behind the two Mercedes cars took their first Attack Mode of the race leaving Frijns out front ahead of António Félix da Costa.

Frijns in front!! He follows up his overtake by protecting his lead and takes his 1st Attack Mode 🙌 pic.twitter.com/0CUIK1mMK2

The Envision Racing driver’s pace proved sensational, pulling a gap on da Costa, taking his first Attack Mode with 26 minutes plus one lap remaining, and crucially retaining his lead as early race leader Vandoorne cycled back into second place.

Entering the final 20 minutes, Frijns’ advantage at the front amounted to one-and-a-half seconds, the Audi e-tron FE07 looking sure-footed and nimble on the bumps of the Rome street circuit. As Frijns took his second Attack Mode, he relinquished the lead to Vandoorne and was once again in the Mercedes sandwich.

This didn’t last long, as Frijns repeated his earlier move on Vandoorne and retook the lead at Turn 4. Vandoorne moved back to the front as his Attack Mode advantage kicked in as the race entered the final 15 minutes, with the two-car scrap for the victory in Rome joined by Jaguar’s Mitch Evans.

Frijns leaped back into the lead, as the front three shuffled, with Evans moving into second and challenging the Envision Racing driver, forcing Frijns to call upon all his defensive driving skills.

Despite a solid defensive job, the Jaguar proved too quick and Evans hit the front and Vandoorne once again caught up with Frijns in second place, only to be passed by Jake Dennis, although the British driver was racing with a five second time penalty.

With just over five minutes added to the regulation race time the battle was for second place. It was Vandoorne’s turn to pass Frijns for second, pushing Frijns into third as Dennis fell back and Jean Eric-Vergne joined the battle for the podium.

Frijns lost out to Vergne as the race end approached, but it didn’t last long as the Envision Racing man pulled off another amazing overtake, followed by a fourth pass on Vandoorne to retake second.

Entering the final lap, Frijns mix of aggressive driving and canny use of energy, as up to six cars battled for the podium paid off, and the Envision Racing driver matched his best result of the season with a well-earned second place. “The race basically went as planned,” confirmed Frijns. “I had a really good start and was thinking about overtaking Stoffel into Turn 4 on the first lap, but he closed the door and I was stuck behind him. I was trying to save energy, but also knew I was quicker, so when i got in front of him, I tried to pull away, and almost succeeded. Then Mitch came out of the blue and was so quick and pulled away so I was left to battle with Stoffel and Vergne, and I really enjoyed it – I won the battle and it was good, fair racing.”

Behind all the drama, Frijns’ team-mate Cassidy had a good first race in Rome, ending up ninth, scoring a point for fastest lap, and showing strong pace generally to score vital points in the battle for the Team’s championship, and Envision Racing’s Managing Director & CTO Sylvain Filippi was encouraged by the showing from the team in the Italian capital. “It was a very strong race for the team,” said Filippi. “Robin did exceptionally well in qualifying, and the race was fantastic with a lot of very clean overtaking, great energy management and we dealt with the Attack Mode phases well. Nick also did well, he scored points and made up a lot of places, which isn’t easy here, and both drivers showed excellent race pace.”