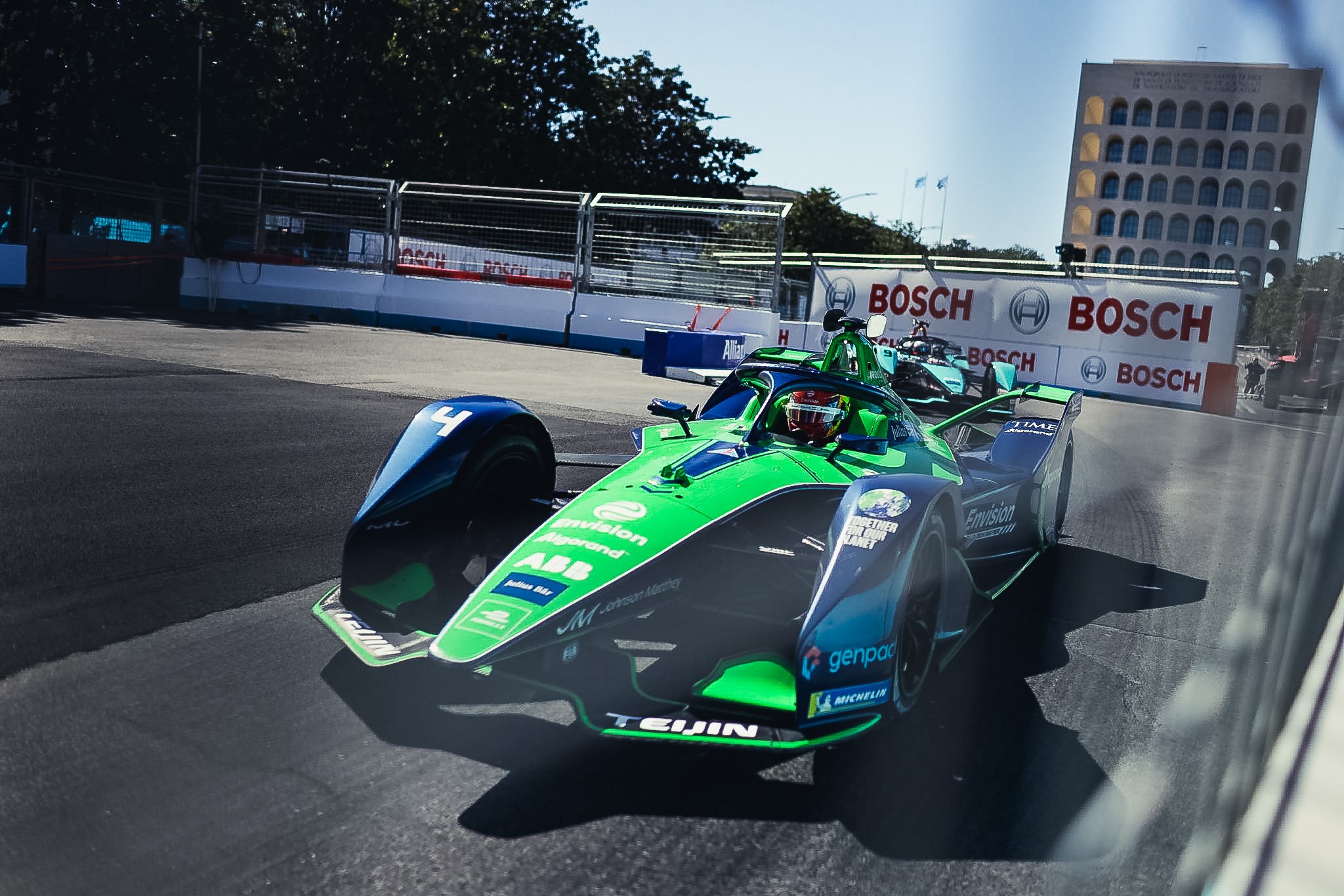 DOUBLE PODIUM JOY FOR FRIJNS AT THE ROME E-PRIX

Big points, big speed and big overtakes made up the story of Robin Frijns’ weekend in Rome, as the Dutch driver made it two podium finishes to ignite his championship challenge

24 hours after securing a second place and a second podium of the season, Envision Racing’s Robin Frijns made it a hat-trick, once again battling for victory on the streets of Rome and taking third place.

One-time race leader Frijns came from sixth on the grid, once again proving why he is one of the most measured racing drivers in the world, combining pace, sublime overtaking, and smart tactics to score another top three and move into second place in the Driver’s championship standings.

In qualifying, Frijns showed great pace once again, underlining his status as a permanent fixture in the knockout phase of qualification. Unlike qualifying for race one in Rome, despite a great start to the quarter final duel against Jean-Éric Vergne, it wasn’t to be, meaning the Dutch driver lined up sixth for Sunday’s round five of the 2021–22 ABB FIA Formula E World Championship.

Under bright, blue skies in the Italian capital, the second race got underway with Frijns, slotted in behind Jaguar’s Sam Bird, as polesitter Vergne headed the train of cars, with the majority of the field holding station throughout the opening sequence of corners.

The status quo was maintained, until Andre Lotterer snatched second place from Jake Dennis just under 10 minutes into the race, with Frijns latching onto the two Jaguar cars, looking to follow them through past a suddenly sluggish Dennis.

Frijns’ aim to get one over on at least one of the Jaguars was achieved as he overtook Bird for fifth with 32 minutes remaining, and he immediately set the fastest lap of the race, hooking himself onto the frantic battle between Lotterer and Dennis.

Entering the final 30 minutes, Antonio Giovinazzi’s stricken car brought out the safety car, bunching up the field, with Vergne maintaining his lead and Frijns sitting in fifth, sandwiched by Dennis in front, and Bird behind.

Frijns made his move on Dennis with a perfectly executed pass at the Turn 7 hairpin, combining measured race craft and aggression to grab fourth place, before taking Attack Mode on the next lap, crucially maintaining position, and setting after Lotterer in third place

With Lotterer out of the way, Frijns made his move on Vergne, taking second place with over five minutes of Attack Mode remaining, before diving into the lead with a bold pass on race one winner Mitch Evans.

Send it!! Robin into the lead 💪 pic.twitter.com/xxxc2nckF5

Approaching the final 15 minutes, the Porsche of Lotterer loomed large in Frijns’ mirrors, and had a minute extra of Attack Mode over the Envision Racing driver, forcing Frijns to employ all his proven defensive racing ability to resist the Belgian driver.

The power advantage of the Porsche proved irresistible for Frijns, who was relegated to second place with 12 minutes left on the clock, just as a second safety car was deployed as Alexander Simms came to grief at Turn 14.

With racing underway once more, and with five minutes and fifteen seconds added onto the race time, Frijns remained tight behind race leader Lotterer, followed by Vergne, who was soon overpowered by a late-race Attack Mode taker in the shape of Evans.

Inevitably, with the additional power, Evans was soon right with Frijns and there was little that the Envision Racing driver could do as Evans took second, and then grabbed the lead from Lotterer.

Entering added time, Frijns found himself in fourth as Vergne made a bold move. As an already frantic afternoon’s racing became even more chaotic, Frijns was forced to employ some fierce defending driving from a resurgent Stoffel Vandoorne, as not far behind, Envision Racing’s Nick Cassidy once again turned in a superb recovery drive, moving up 10 places from his qualifying slot of 18th to eighth.

Just when a second podium of the weekend looked out of reach, another stellar pass on Lotterer put Frijns back into the top three, as behind, Cassidy made up another place, taking seventh place, before the Kiwi’s superb charge came to an abrupt end in the wall, triggering a third safety car.

A one lap dash to the chequered flag saw Frijns consolidate his third place and hold onto it, whilst clocking the fastest lap, after a classic battle on the streets of Rome, as Evans took his second win of the weekend ahead of Vergne.

“Really pleased to score another podium,” confirmed Frijns after the weekend’s final race, “especially starting from P6 for race two. It was another good battle, a lot of fun, fighting with Vergne, Mitch and Stoffel and to be honest I felt a bit stronger in the second race. We are making progress and all eyes
are on Monaco.”

Envision Racing’s Managing Director & CTO Sylvain Filippi reflected on a number of positives from the double-header race weekend, and like his driver is excited to be taking the recent form to the glamorous surrounds of Monaco.

“It is fantastic to leave Rome with a double podium, Robin drove really well and the result was testament to the hard work everybody at the Envision Racing team has been putting in recently. Nick also showed strong race pace coming from P18 to P6 in race two. Unfortunately he was pushed into the wall in the latter stages of the race.

“Overall we have really showed the pace and potential of the car, so to get such a strong haul of points this weekend is great, there’s still a long way to go in the season, but we are motivated and confident and can’t wait to see what we can do in Monaco.”