Race Spotlight: Italy And Its Fight Against Climate Breakdown

As we get ready for Rome on the 10th of April (our next fixture in the FIA Formula E calendar), we’re delving into Italy and exploring what its leaders are doing about climate breakdown.

If you’re anything like us, you can’t think of Italy without thinking of classic cars. It’s the home of the famous Amalfi Coast drive, iconic car manufacturers and of course, the Italian Job. But perhaps what it’s less renowned for is its city smog, its renewable energy capability and its pioneering school climate curriculum!

This October, Italy will host the 16th G20 summit in Rome, where it’s government has promised to prioritise climate and carbon neutrality. In the same month, it will also host a youth leaders climate summit and a pre-COP climate conference in Milan, before COP26 heads to Glasgow in November. It’s safe to say 2021 is an important year for Italy and climate action.

Italy is smack bang in the Mediterranean region, an area which the IPCC Report On Climate Change and Land highlighted as one the most likely to be badly affected by the impacts of extreme weather. But this is nothing new! A warming climate has already seen Italy face melting glaciers in the Italian Alps, and an increase in severe flooding and violent storms throughout the region. 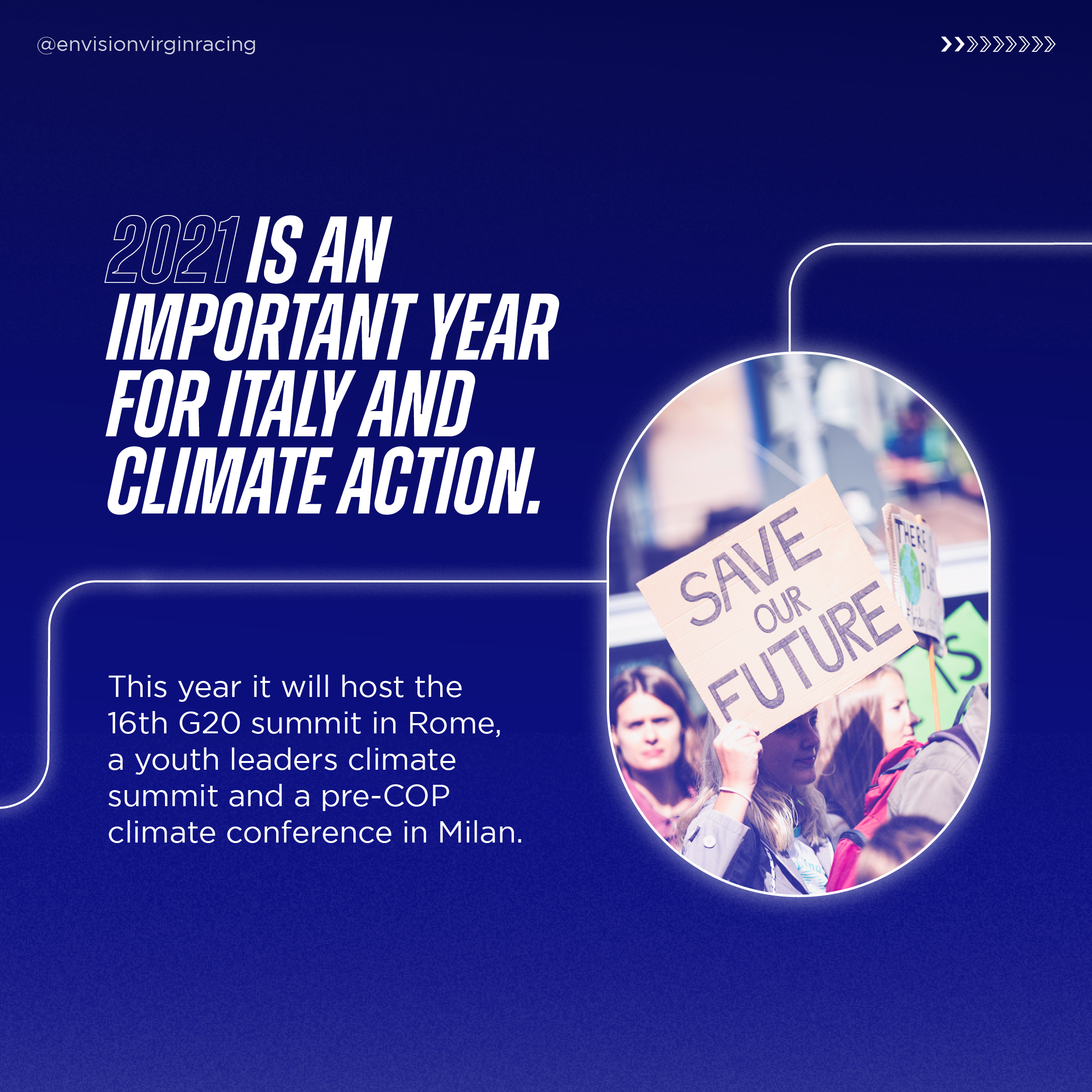 Climate models suggest Italy will see an increase in temperature of up to 2°C between 2021-2050 (compared to the period 1981-2010), and in the worst-case scenario, temperature rise may well reach 5°C. The predicted cost of this varies but is expected to be between 0.5% and 8% of GDP by the end of the century (Source: CMCC).

Now, this all sounds a little bleak, so let’s take a look into the strategies and policies the Italian government has implemented to combat this…

Italy is a member of the European Union, meaning its environmental policies largely fall under EU environmental legislation. However, it is taking its own steps to reduce its impact.

Italy’s GHG emissions have dropped by only 17.5% between 1990 and 2017 (Source: Climate Transparency) and its cities seem to have been trailing behind it’s EU counterparts. Many argue this is due to a lack of adaptation strategy, which was only approved in 2015. 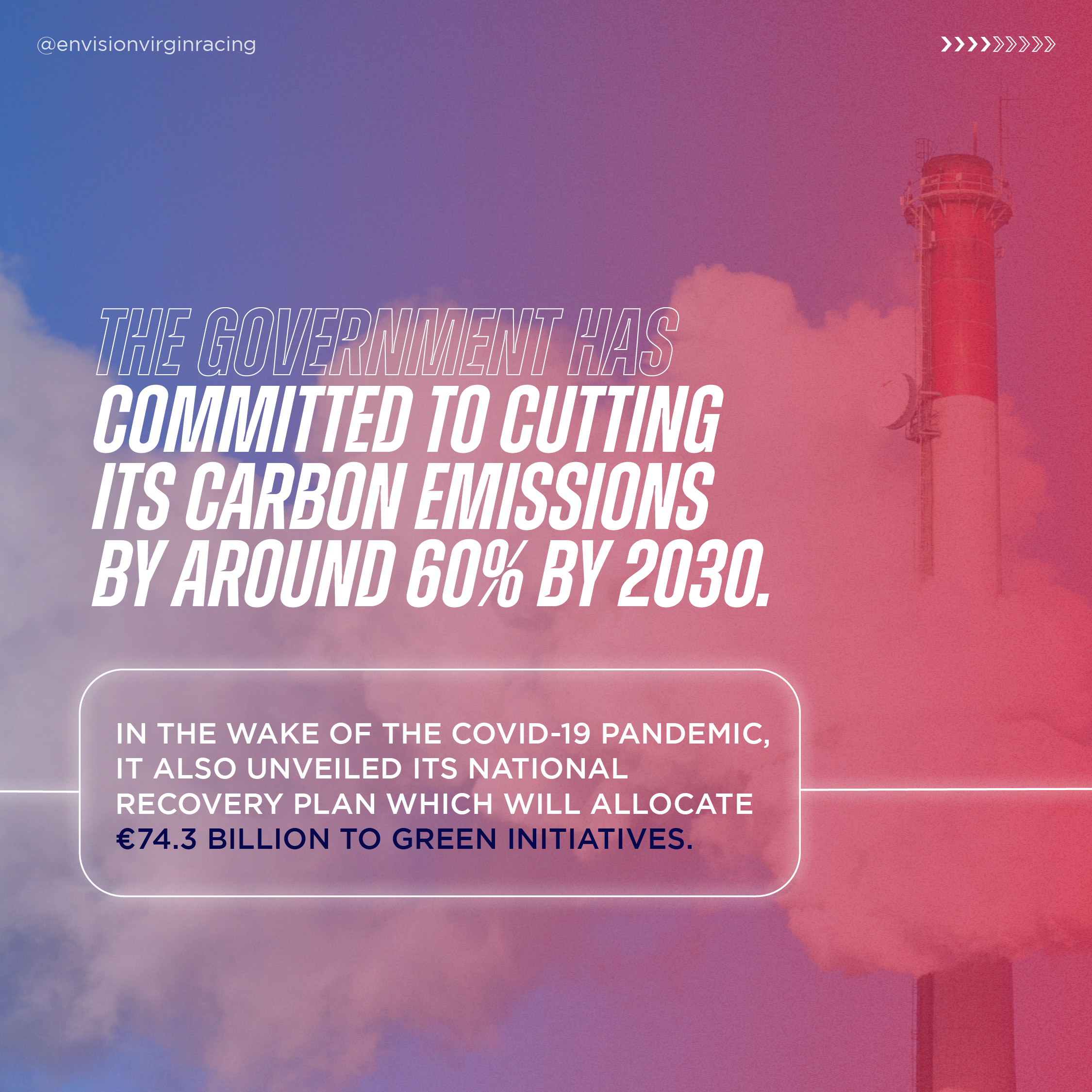 Yet, Italy has recently committed to cutting its carbon emissions by around 60% by 2030 and will use €80 billion of EU funds for energy transition in the next five years. Not only this but in the wake of the COVID-19 pandemic, the Italian government has unveiled its national recovery plan which will allocate €196 billion to six areas, including €74.3 billion to green initiatives. Amazing, right?

Italy is on a mission to decarbonise and has committed to phasing out coal by 2025. However, with approximately 90% of its coal supply being imported, this will have a lesser impact compared to other coal-producing G20 countries. Fossil fuels still make up 79% of Italy’s energy mix, despite its increase in renewables (Source: Climate Transparency).

So are they doing enough? Its 2019 National Integrated Plan for Climate and Energy revealed its aim to have 55.4% renewables in the electricity mix by 2030, with half of it coming from solar. However, Italy has no 2050 renewable energy target. This seems a little disappointing, especially when Italy’s location means it has amazing solar energy potential. Many campaigners argue that this shift to renewables isn’t happening quickly, or ambitiously, enough. 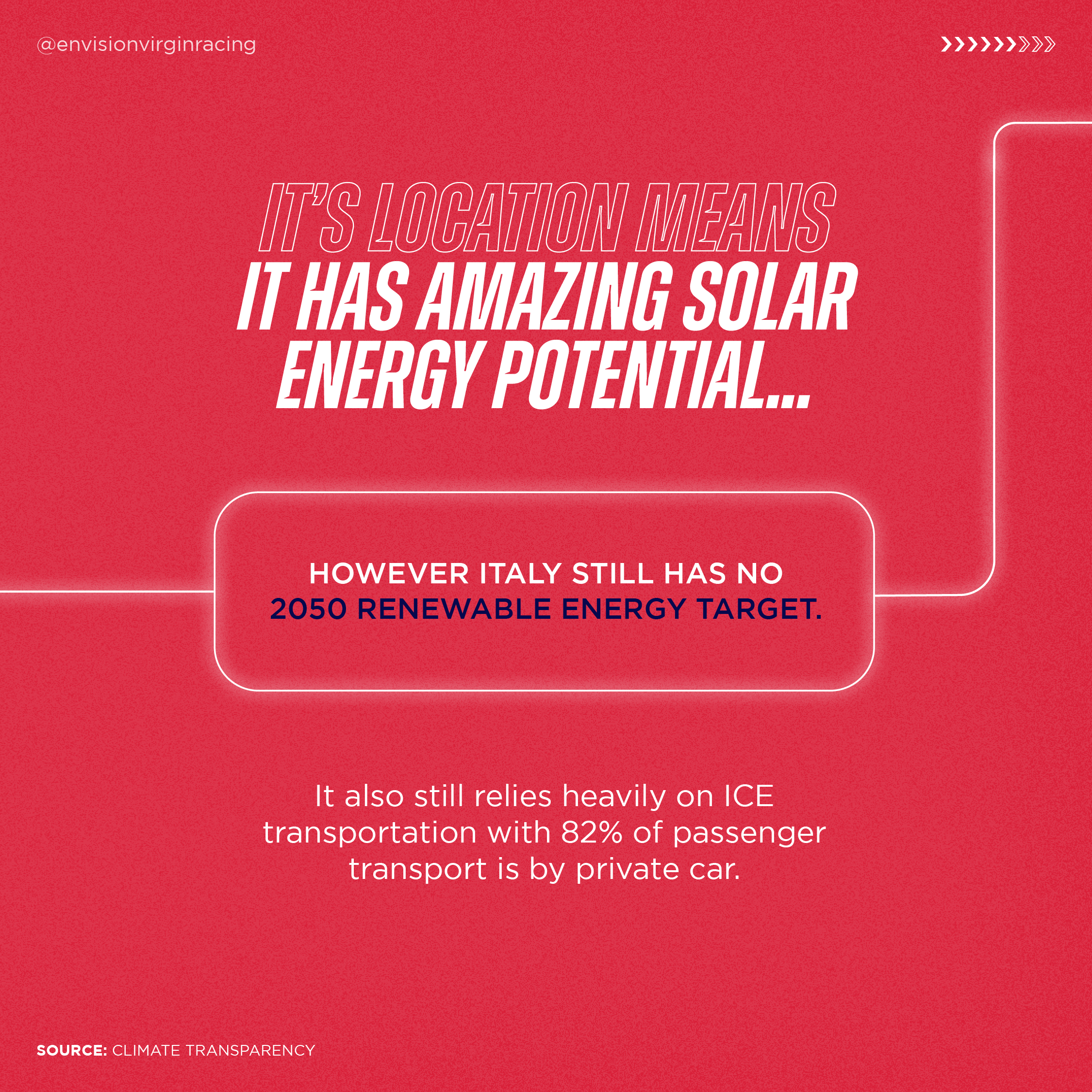 Italian cities are no strangers to smog, and the country has been driving initiatives designed to reduce carbon emissions, particularly in transportation. It’s Sustainable Mobility Fund has co-funded nearly 190 projects at a total cost of €195 million.

In 2019 government ministers from all EU states unanimously approved the ‘Climate Decree’, which adopts urgent measures to promote air quality. This included a focus on increasing sustainable mobility, funds for reforestation of metropolitan cities and for the creation of green corners in shops where products without plastic packaging are sold. However, the same year it was suggested that Italy had snubbed calls by fellow European countries to cut EU GHG emissions to net-zero by 2050.

But what about its famous automotive industry? In Italy, 82% of passenger transport is by private car, and 78% of freight transport is by road (Source: Climate Transparency). Both of these still rely heavily on fossil fuels, so in order for Italy to hit its decarbonisation targets, this is an area that needs to be quickly addressed.

That’s why the government aims to put one million electric vehicles on the road by 2022. By providing subsidies of €60m in 2019 and €70m in 2021/22, leaders are hoping to encourage the purchase of new electric and hybrid vehicles. However, Italy still has no official target for phasing out internal combustion cars (Source: Climate Transparency). Instead, local bans of fossil-fuel-powered vehicles are temporarily activated during times of peak smog. In January this year, protestors took to the streets to campaign against dangerous levels of air pollution across Italian cities, which soared above legal limits. For a period of three days, polluting cars were banned from key cities in an attempt to get these levels back under control. 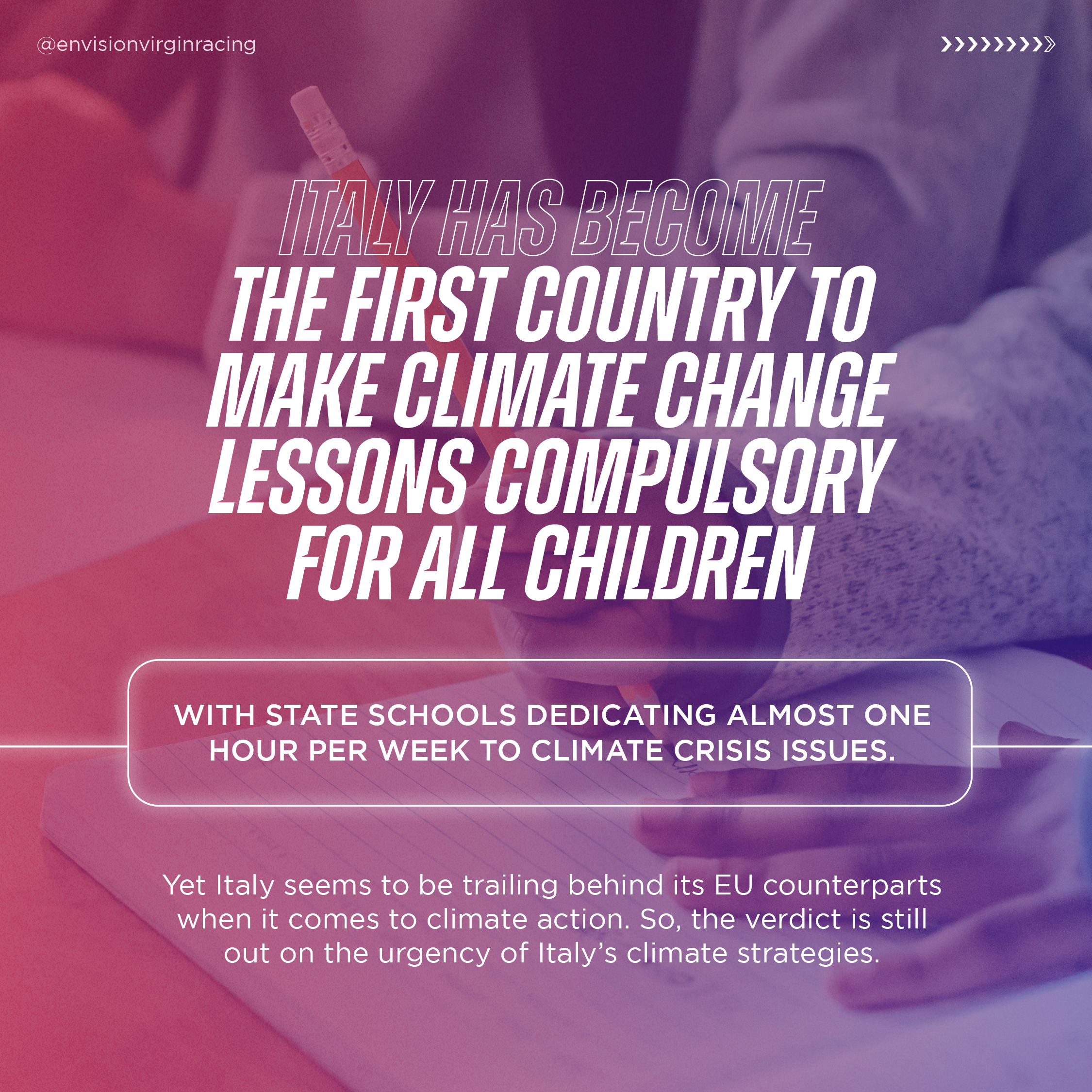 But having previously been slow to adapt to electric vehicles, Italy is turning into a noteworthy player and in 2020 there were over 32,000 fully electric cars sold (Source: Clean Technica).

But perhaps the most exciting move to combat climate breakdown is Italy becoming the first country to make climate change lessons compulsory for all children. All state schools dedicate almost one hour per week to climate change issues in the hope of educating children on the dangers of the climate crisis and inspiring them to act.

So, while the verdict is still out on the urgency of Italy’s climate strategies, its pioneering approach to the next generation is one to be commended. It’s the voices of youngsters that are often overlooked in climate action, so we hope to see more countries focusing on the next generation and equipping them for the fight for our planet.