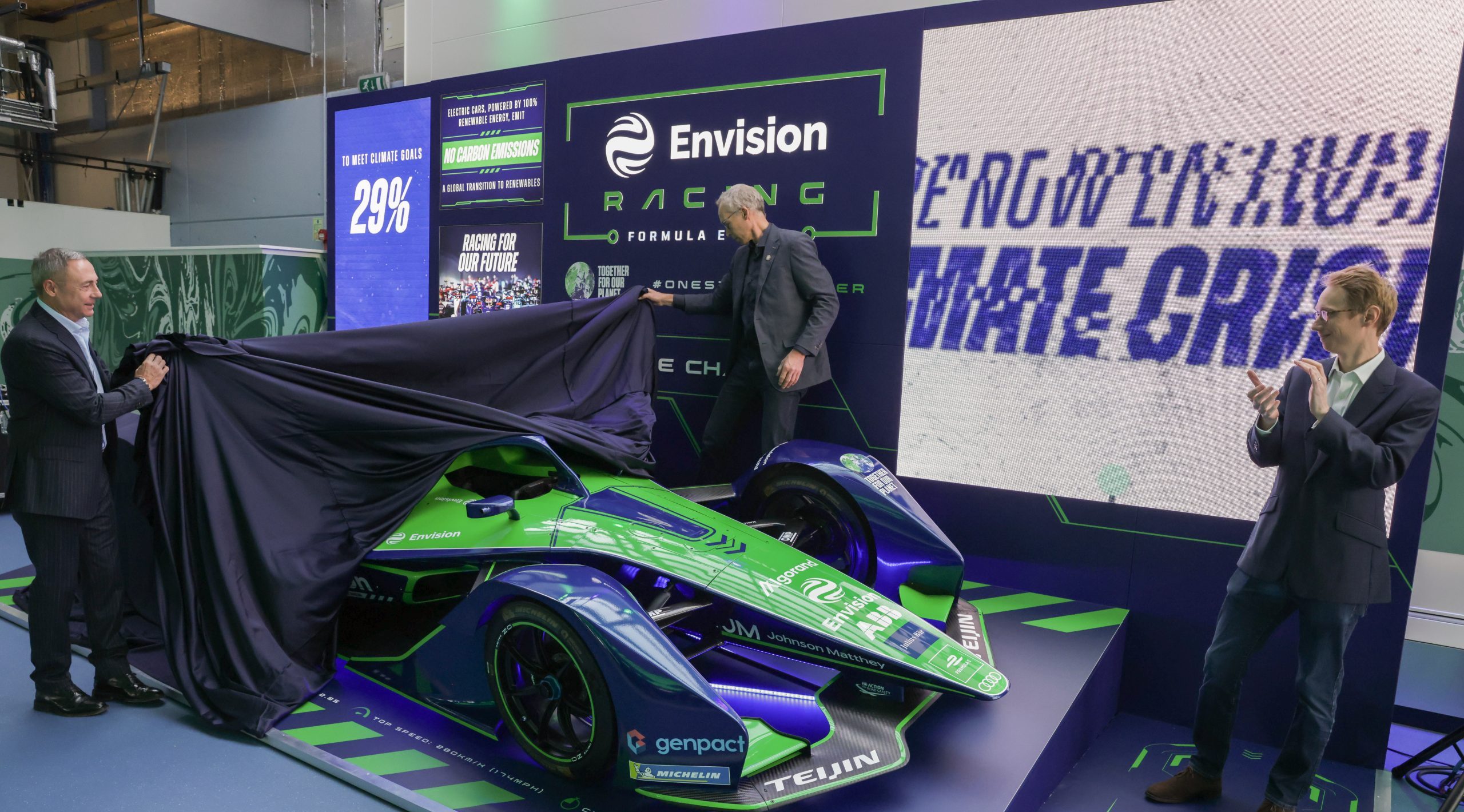 Heralding the start of a new chapter for Envision Racing, the announcement was made at COP26, where the team’s new ‘green’ look for season eight was also unveiled. Globally renowned sustainability scientist Professor Johan Rockström joined Envision Racing’s Chairman of Board Franz Jung and Managing Director Sylvain Filippi to officially reveal the new livery.

The new look race car will be driven by Robin Frijns and Nick Cassidy in season eight, as they aim to strengthen Envision Racing’s position as one of the most successful teams in Formula E. During the past seven seasons, the team has recorded 11 wins and 33 podium finishes. 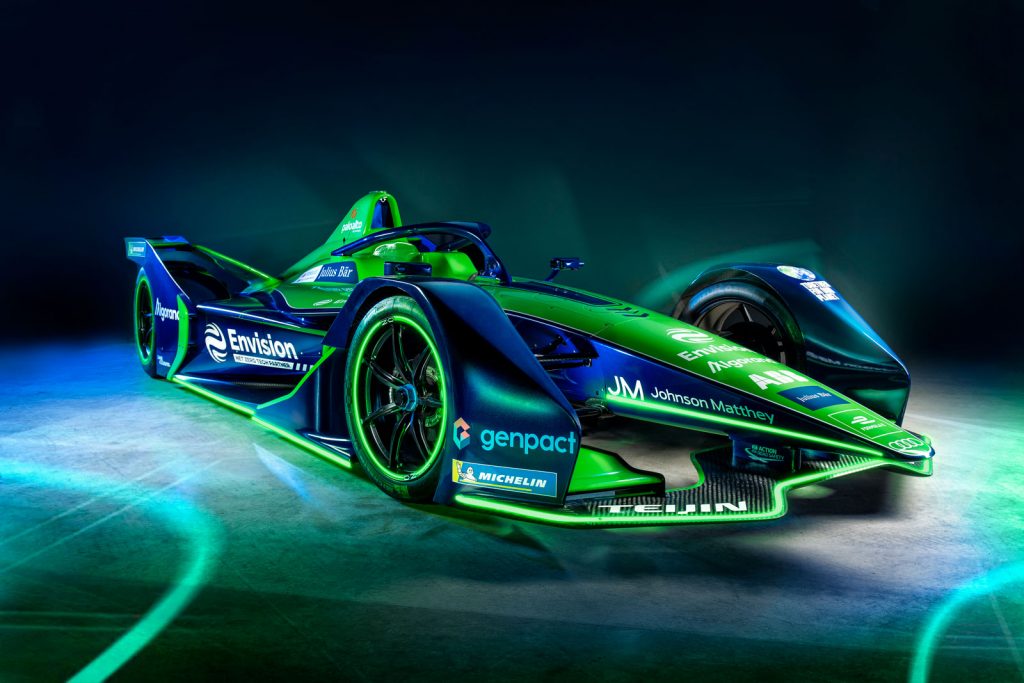 Sylvain Filippi said: “Since becoming a founding member of Formula E, we have been on an exciting journey that celebrates sport, and its potential to influence sustainability. The team exists to accelerate the global transition to electric vehicles and renewable energy – a purpose shared by Envision Group and one that’s inspired the new design of our race car.”

During the summer, part of Envision Group – Envision AESC – shared plans for new battery plants to supply state of the art, next generation batteries for Renault in Douai, France, and for Nissan in Sunderland, UK. The plants could potentially benefit from up to £3.5b total investment by 2030, creating a combined capacity of 60 GW/h and up to 6,000 new high value jobs. Both plants will be powered by 100pc renewable energy and support our global ambition to make high-performance, longer-range batteries for EVs more affordable and accessible for hundreds of thousands more motorists annually.

“Envision Group is recognised as a pioneer in net zero technologies and epitomise the progression that can be achieved through embracing a core purpose of sustainability, said Sylvain Filippi.

“The new design of our Formula E car celebrates Envision Group’s ownership and recognises their unrelenting ambition to accelerate the global transition to net zero. We are proud to be owned by one of the world’s leading, most sustainably innovative companies and this will inspire the continued success of Envision Racing and energise our Race Against Climate Change.”

Envision Racing’s ‘Race Against Climate Change’ has seen COP26 become a focal point for a series of its sustainable initiatives. In the Blue Zone at the Conference, Envision Racing launched the world’s first electric two-seater race car, which utilises fast charging, high performance and long-range electric battery technology created by Johnson Matthey. In collaboration with Glasgow City Council and UK Government’s Together for Our Planet campaign, Envision Racing created a scale replica Gen 2 Formula E car from recycled consumer waste, which was displayed in Glasgow’s Silverburn shopping centre to raise awareness of the impact of single use plastic on the environment. 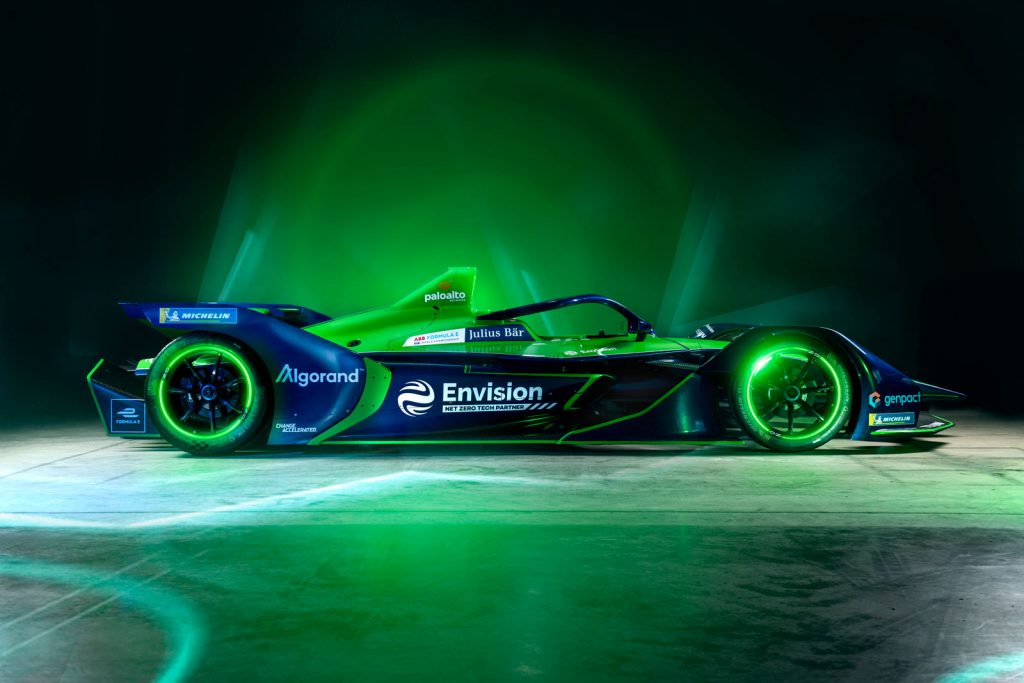 The team’s new look, celebrating Envision Group’s ownership, will take to the track in season eight of the FIA Formula E World Championship, with the first race taking place at the Diriyah E-Prix in Saudi Arabia on 28 January 2022.

“We would like to thank Virgin for all their support and wish them every success for the future, added Sylvain Filippi. We are raring to go for the new season and hugely motivated about the potential of Formula E in supporting sustainable progress. Formula E World Championship audience numbers were up 32% last season, attracting a record breaking 316 million fans. This creates a huge opportunity to engage people in sustainable technologies and influence positive change.

“Formula E shows that EV technology can more than cope with the safety and performance requirements of modern commuting and road driving, and that car owners don’t need to make any compromise when switching from petrol and diesel engines. Envision Group’s partnership with Envision Racing will help to show the public this in a compelling way. This could play an important part in helping to accelerate the public adoption of EVs, supporting the aims of the UK Government’s Net Zero Strategy as well as EU and global efforts to be climate-neutral by 2050.”

Franz Jung, Vice President of Envision Group and Chairman of the Board of Envision Racing Formula E team, concluded: “Although solving sustainability challenges requires innovative technologies, it also needs creative ways of helping people to understand and engage with new opportunities and ways of doing things. Partnering with Envision Racing helps to achieve this by showcasing the possibilities of electric vehicles, which supports Envision Group’s commitment to achieving decarbonisation.”