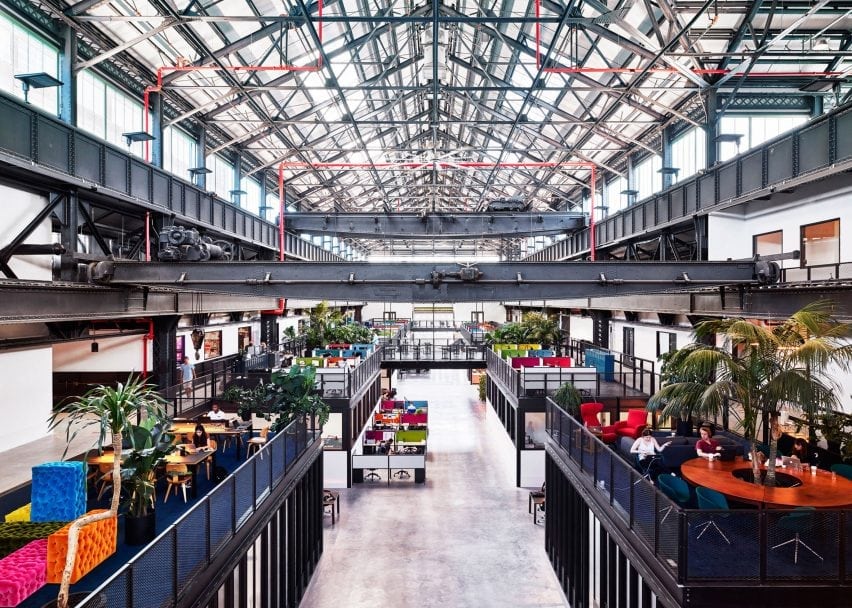 In 2017, the DS Virgin Racing team hosted its largest Innovation Summit to date at Brooklyn’s New Lab, bringing together business leaders from across the globe and more than 250 delegates. Now, 12 months on, we took time out from our race week schedule to revisit the site and chat to its team about some of the work they are doing to help address climate change…

New Lab was the location for the team’s Innovation Summit in 2017 featuring Richard Branson, but tell us a little more about it and also the building’s origins?
We were thrilled to be able to host the Innovation Summit and Richard Branson at New Lab last year. New Lab’s mission is to serve entrepreneurs who are defining the future of technology and human experience, which is well-aligned with the summit’s objective of bringing together top business leaders and entrepreneurs to discuss the positive role that business and technology can play in tackling the global issue of climate change.

We maintain an optimistic view of the power of technology to positively impact the future, and being able to serve as a platform for these types of conversations to take place is important to us. New Lab is an 84,000 sq ft hub in the Brooklyn Navy Yard that uniquely supports entrepreneurs working in advanced technology. With resident space, $4M of on-site product realisation resources, specialised programming, and access to a network that includes city agencies, venture capitalists, domain experts, and leading corporations, New Lab makes innovation move faster.

The building New Lab is based in was originally constructed in 1904 and served as a machine shop for the ships built in the Brooklyn Navy Yard leading up to and during World Wars I and II – including the USS Arizona and USS Missouri. Though decommissioned as a naval shipbuilding facility in 1966, the Yard has always been an important site of manufacturing for New York City, and maintains its original spirit of innovation.

New Lab’s building had been abandoned for over 20 years when our co-founder David Belt first visited it in 2011. Inspired by the vastness of the space and its history, he and collaborator Scott Cohen envisioned how this site could once again represent the state of the art of technology, today.

Can you tell us more about some of the companies based there, in particular those that have links to sustainability?
Our community consists of over 600 individuals representing over 100 growth-stage startup companies. These companies span multiple disciplines including robotics, AI, energy, connected devices, transportation, urban tech, additive manufacturing, and blockchain, and have a combined valuation exceeding $1 billion. Sustainability is important focus for many of our members, especially those working in the fields of transportation, waste reduction, energy and biofabrication.

For example…
JUMP Bikes launched the first dockless bike share in the US and developed an electric assist bicycle currently deployed in seven cities, with the goal of transforming cities to be smarter, greener, more accessible and friendlier for everyone.

Tarform Motorcycles is developing a revolutionary electric motorcycle to be released this fall.

Revivn helps businesses like Airbnb, Twitter and Dentsu Aegis Media by collecting their outdated technology, clearing their data and re-purposing their hardware for social good, such as supplying classrooms with computers or outfitting mobile medical teams with cell phones.

ReFund is developing a recycling system which combines a shredder/compactor, blockchain-based crypto-currency, and GPS enabled pickups to incentivize recycling and reduce waste.

Voltaic Systems is a portable solar power company that designs high-performance solar panels that
function as chargers for personal electronic devices such as smartphones, laptops as well as industrial and IoT applications. Voltaic’s products, stemming from the first-ever solar backpack designed in 2003, are well-designed, easy to use and meant to last. In addition to keeping devices charged regardless of location, the gear also effectively turns users into street-level ambassadors for solar energy.

Biolite is on a mission to bring Energy Everywhere™ with revolutionary products that transform the way we cook, charge, and light our lives off the grid. The BioLite team believes that advanced technologies, built on sustainable business practices, have the power to change the world. Their unique Parallel Innovation business model pairs the needs of families living in energy poverty with the passions of outdoor enthusiasts pushing the boundaries of life outdoors and on the go.

TouchLight Innovations is a power generation solutions company that enables self-generation of electricity within commercial facilities via the utilization of their Energy Tile – an in-floor energy harvesting solution that captures both mechanical and solar energy from the floor (from people walking and cars driving). They are developing this hybrid system to harvest energy which is traditionally lost, converting parking lots into power plants that can increase the power capacity of a given property.

Modern Meadow is designing a future where animal products are animal-free. They engineer living cells to create lab-grown leather materials with structural and aesthetic properties which go beyond the possibilities of traditional animal-based products.

As you know, sustainability is a really important topic to the DS Virgin Racing team – how important is it to New Lab and how does that influence your day-to-day decisions?
We view the future of technology through a humanist lens, and believe in its potential to benefit the greater good. Though one could argue that technology has created or contributed to many of the problems we face today, we believe it can also hold the key to solving many of these problems, the health of the planet we inhabit and depend on being one of them.

When we are evaluating prospective member companies, some of the criteria we look at are the implications of a company’s product. Does it offer a solution to an existing or future problem? Does it have the potential to improve people’s lives? The way cities function? The way we understand and
interact with our environment? Or does it contribute to a problem? Sustainability is one of the verticals that can come into play in this assessment.

We also strive to support the sustainability efforts and development of emerging or yet-unproven sustainable technologies by facilitating pilot programs for member companies. Last fall, we worked with Jump Bikes and Voltaic Systems to facilitate pilot programs for their motor assist bikes and solar panels, respectively, within the Brooklyn Navy Yard and are currently pursuing a pilot with Sapient Industries that would allow us to better understand New Lab’s energy utilisation and identify energy-saving opportunities.

How important is the subject of climate change to the people of Brooklyn these days? Have you seen attitudes change recently?
It seems like a large percentage of the population in Brooklyn is aware of and cares about climate change. You can see this attitude reflected in small acts that constitute a more environmentally aware lifestyle and seem to be gaining momentum, such as utilizing reusable water bottles and shopping bags, a reliance on biking and public transportation rather than cars, and a city composting program. Of course, these acts alone won’t solve the problem but it’s a positive indicator of the level of awareness.

The fact that coastal cities tend to feel the effects of extreme weather conditions caused by climate change first may also be a factor – Hurricane Sandy was a sobering example of how vulnerable the city can be to these conditions.

What impact do you think the Formula E race at Red Hook has made on the city and the people of New York?
The Formula E race is exciting because it feels on par with traditional races – as opposed to a watered down sustainable version. Most people go to see the race, not necessarily the technology behind it, but the fact that it’s there is and is celebrated leaves an impression on people. The race is a convincing testament to the fact that electric car technology can be both sustainable and sexy.

This is something that’s apparent within the New Lab community as well. Most of the member companies are working on creating marketable products, so no matter how effective their technology is, there is a business and storytelling element that’s equally important. No matter how amazing the technology, it must be adopted at scale in order to make an impact.