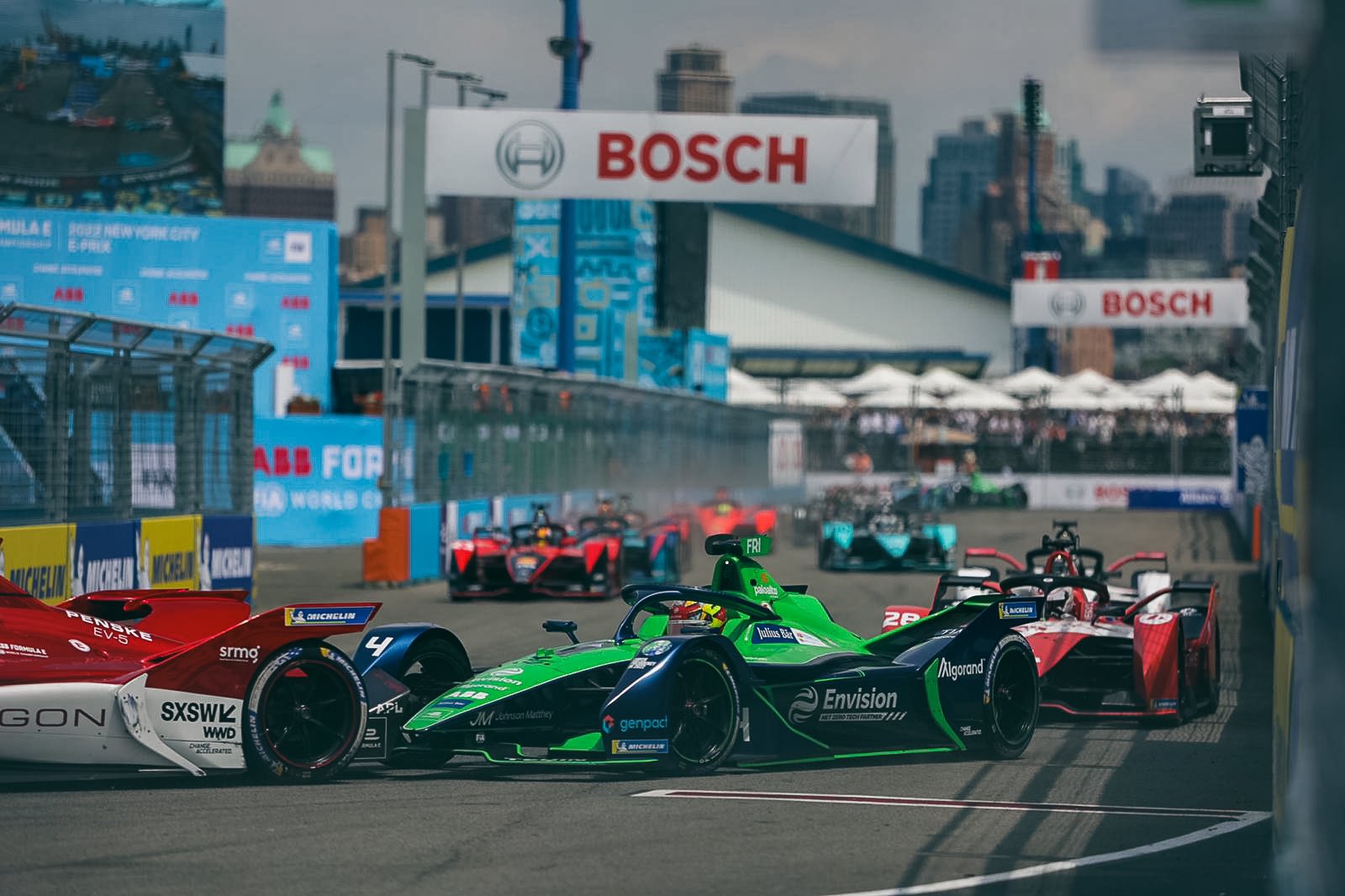 The drama continued before the second race of the New York City E-Prix even started. Envision Racing’s Nick Cassidy claimed a second pole position in 24 hours, only for it to be taken away due to a technicality, forcing the New Zealander to start from the back of the grid.

It was a cruel blow for the Envision Team who worked frantically into the early hours to rebuild Cassidy’s Audi e-tron FE07 following his massive race-ending shunt in the closing stages of the opening E-Prix of the weekend.

Frijns continued his superb pace, topping the timesheets in Group A qualifying for the majority of the session. In the mad scramble to reach the knockout stage, Frijns was pushed down to sixth as team-mate Cassidy went the other way, surging to second place to make the head-to-head phase in qualifying for the second day on the bounce.

Cassidy was smooth and dominant in the knockout phase, seeing off Stoffel Vandoorne in the second quarter final and Porsche’s André Lotterer by over a second in the semi final to sail into the final of qualifying for round 12 of the  2021–22 ABB FIA Formula E World Championship in New York City.

The final showdown saw Cassidy take on António Félix da Costa. The Kiwi went first, setting a scorching pace flying to record a stellar first sector and whilst da Costa reeled him in, but it wasn’t enough, and Cassidy claimed his second pole position of the weekend, and his third on Brooklyn tarmac.

However, it was all for nothing as the team were deemed to have broken the regulations following a forced battery swap and the number 37 Envision Racing car was sent to the rear of the grid.

Unfortunately, following the completion of the Qualifying session, Nick Cassidy has been given a grid penalty. He will now start the race from the back.

He had secured pole position in the duels. #FormulaE pic.twitter.com/RAkbmHY80R

Cassidy’s penalty made Frijns the leading Envision Racing driver, starting 10th. Renowned for his patience and ability to carve through traffic, the Dutch driver was up to eighth by the end of lap one, as the default pole position-winner da Costa led Alexander Sims.

Frijns made up another place with 32 minutes remaining, passing Jake Dennis to take seventh. The first real change to the leading train of eight cars, headed by da Costa came with the first activations of the one and only eight-minute Attack Mode of the race.

The @Envision_Racing driver is on the attack and up into P8 👏

Frijns elected to take his Attack Mode later than the rest of the top 10, with 27 minutes left on the clock. Unfortunately for the driver of the number four Envision Racing car, his exit from the Attack Mode zone was compromised by Lotterer and Frijns slotted into ninth place.

Entering the final 20 minutes of the E-Prix,, Frijns worked his way back to seventh place. Sixth place followed with a neat move on Jake Dennis. A huge sideways moment for Evans allowed Frijns to bridge to gap to the top five as Vandoorne passed Sims for second place and Evans’ team-mate Sam Bird, assisted by Attack Mode, heaped the pressure on Frijns.

Bird made his way around Frijns as Evans and Nyck de Vries came together at turn one with seven minutes remaining. One lap later, more close racing would lead de Vries damaging his front wing as he slotted in behind compatriot Frijns.

A great effort by Robin Frijns. He moves forward by 4 places to secure 6th in New York City 🇺🇸#NYCEPrix pic.twitter.com/63QLwrNSKT

With one minute remaining, a multi-car collision at turn six brought out the yellow flags and at the chequered flag, Frijns consolidated more strong points, coming home sixth and helping Envision Racing extend their lead over Porsche in the Teams standings. Up front da Costa claimed the victory ahead of Vandoorne and Evans.

Envision Racing’s Cassidy ended up 17th, but will be buoyed by such a memorable weekend and will look to take that speed and confidence into the remaining four races of the season, starting with the team’s home race at the London E-Prix.