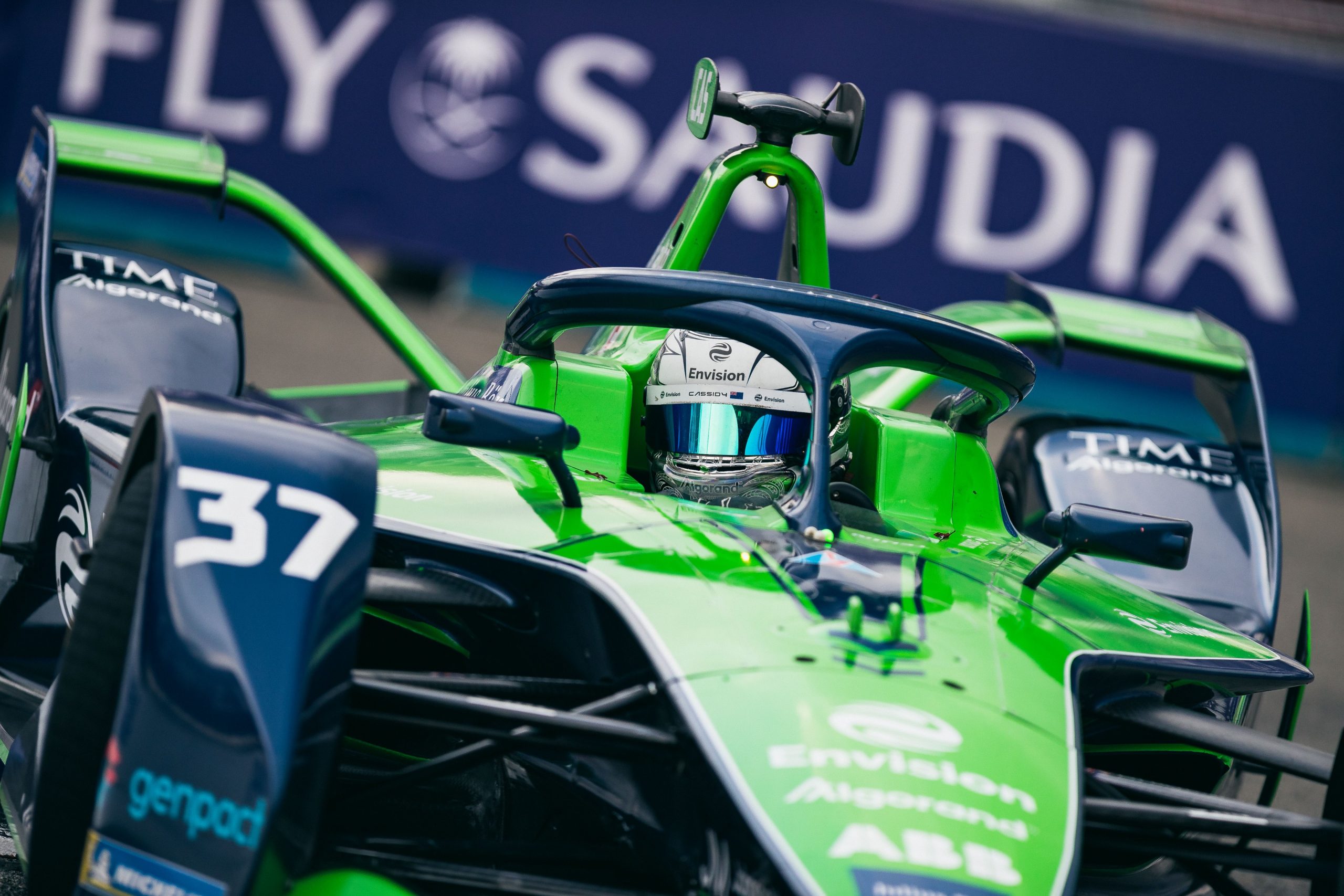 Chaos, confusion and rain reigned at the New York E-Prix. Envision Racing’ Nick Cassidy claimed a stunning pole position for the weekend’s first race and dominated it, only for a late rain shower to catch the Kiwi driver and several other competitors out in spectacular fashion.

Not that it mattered. Despite ending up in the barriers, Cassidy was declared the deserved winner, with team-mate Frijns returning to the podium, and the pair bagging a precious 43 points for the team.

Cassidy combined speed with mature racecraft to lead from the front, whilst Frijns employed his proven, world class ability to outfox those around him and think several moves ahead all race long.

The race-ending incident which involved Cassidy, Lucas di Grassi and three other cars was sizeable. All drivers were caught out by standing water entering turn six and luckily no serious injuries resulted as multiple cars collided.

Frijns inherited the lead in the moments following the smash, with some extremely canny, heads-up driving, and did well to come away with third as the race was prematurely ended. He could quite easily have won it! 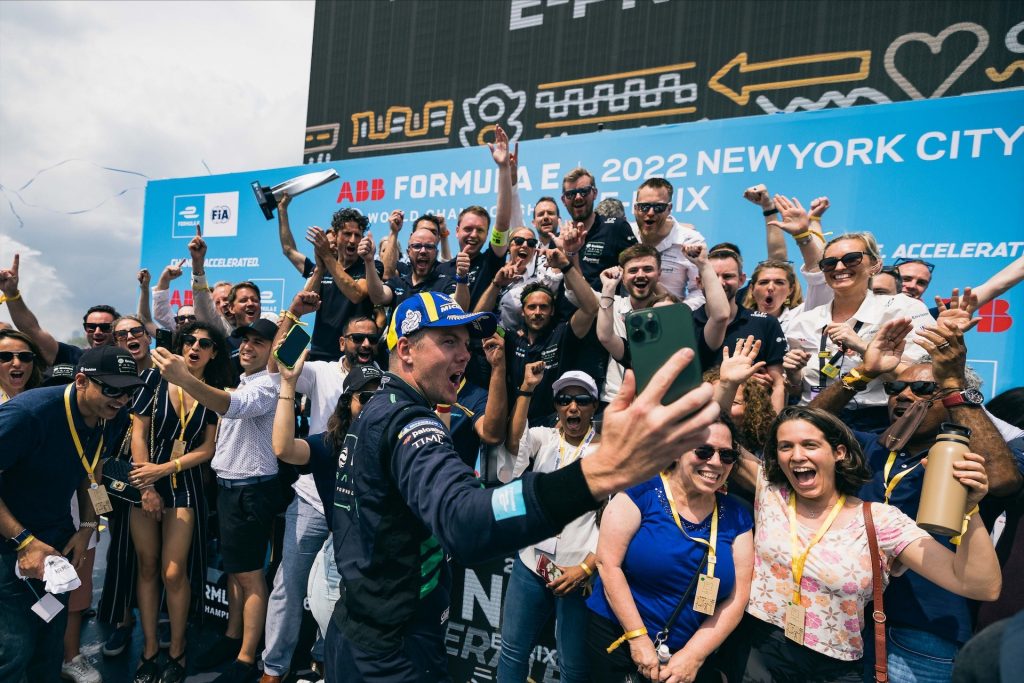 Frijns pulled out all the stops in the first phase of qualifying. A stellar lap in the dying seconds of qualifying sent the number four machine to the top of the times in qualifying Group A, edging out team-mate Cassidy, to make it an Envision Racing one-two, sending both cars through into the knock-out phase.

For Group B qualifying the grey skies surrounding the Red Hook district of Brooklyn delivered a significant amount of rainfall, compromising championship hopefuls Mitch Evans and Jean-Éric Vergne. The pair would not make it through to the duels.

On a drying track, Frijns took on Pascal Wehrlein, only to lose out to the Porsche driver and settling for a seventh place starting slot for the opening E-Prix of the weekend.

Next up, Cassidy’s turn to qualify. The Kiwi took on Jaguar’s Sam Bird in the second head-to-head battle of the weekend and capitalised on an error from the British driver to win the duel and progress to the semi-final to take on Wehrlein.

Cassidy played a blinder in his first semi-final appearance of the season, beating Wehrlein and making it into his maiden qualifying final to take on the Mercedes of Stoffel Vandoorne.

Following a thrilling face-off, Cassidy edged out Vandoorne by a whisker to claim his third career pole position, hustling and sliding his Envision Racing Audi e-tron FE07 around the Brooklyn track in style.

Cassidy made an absolutely textbook start when the lights went out to start the New York E-Prix. In fact, so did team-mate Frijns who quickly moved up from seventh to fifth as Vergne came to grief.

With Cassidy making the early running, leading di Grassi and Sébastien Buemi, behind Frijns looked racey in fifth, hassling Wehrlein for sixth, and eventually passing the German driver to set about Vandoorne in fourth.

WHAT A START from @NickCassidy_ 🚀@LucasdiGrassi manages to swoop into P2 with @Sebastien_buemi following him into P3, ahead of @svandoorne!

As the race entered the final 30 minutes Cassidy found himself under relentless pressure from di Grassi. The Envision Racing man was forced to draw on all his multi-discipline motorsport skills and experience to keep the lead.

Cassidy took his second Attack Mode, followed one lap later by di Grassi, with 20 minutes-plus-one-lap remaining. Vandoorne joined in with the fun, making it a three-way scrap for the win. It was battle on.

Vandoorne moved up into second approaching the final 15 minutes, sliding past di Grassi and setting about the so-far-faultless, and consistently quick Cassidy up front. Further back, Frijns made his way around Buemi to take fourth as the rain returned to the circuit.

Scrap that… WHAT A BATTLE! @RFrijns now runs P3 as both he and @LucasdiGrassi make the overtake on @svandoorne ⚔️

As di Grassi attempted to wrestle second place from Vandoorne, the ensuing tussle at turn one gave the wily Frijns a chance to take advantage and move up into third with a slinky and opportunistic move.

Entering the final 10 minutes, the rain increased significantly, completely soaking the circuit. Frijns relished the wet conditions, catching the leading duo at a rapid rate when suddenly the E-Prix changed in an instant.

Cassidy, Vandoorne, di Grassi, Wehrlein and Buemi all aquaplaned straight on at Turn 6 on that standing water, leaving Frijns P1 at the Red Flag.

The next few seconds were full of confusion and chaos. As a full-course-yellow flag was thrown due to the deteriorating conditions, Frijns emerged from the mist and spray in the lead as Cassidy, Vandoorne, di Grassi, Wehrlein and Buemi all aquaplaned off the circuit at high speed in a scary looking shunt.

Following a lengthy stoppage, with the track described by di Grassi as “undriveable”, the race did not resume, and with the result declared by counting one lap back from the stoppage Cassidy was declared the winner ahead of di Grassi and Frijns.