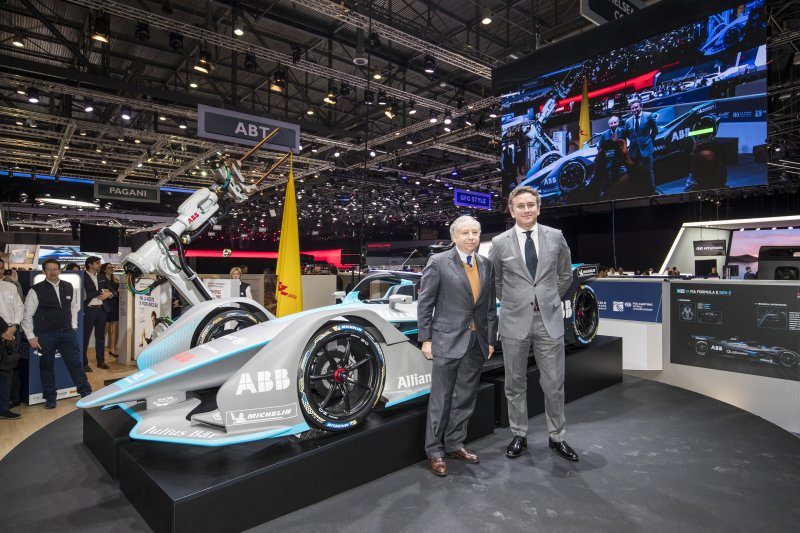 Following January’s digital launch of its new all-electric racer, the FIA and Formula E have today released the full technical specification for its Generation II car during a special unveiling at the Geneva Motor Show.

Virgin Racing Team were amongst the guests to watch the covers come off the new single-seater as it was showcased in the flesh for the first time by FIA President Jean Todt.

Looking every bit as futuristic as we expected, the Spark Racing Technology built car now has some impressive stats to go with it. Aside from the biggest one being that drivers no longer need to swap cars; perhaps its most impressive figure is the top speed, which now stands at an impressive 280kph (174mph) – 55kph (34mph) more than its predecessor (225kph // 140mph).

Next comes the energy from the battery – now made by McLaren Applied Technologies as opposed to Williams Advanced Engineering – which has increased almost twofold from 28kw/h to 54kw/h. That means in qualifying mode power jumps from 200kw to 250kw – the equivalent of 335bhp, up from 270bhp. In race mode that increase goes from 180kw to 200kw, equivalent to 270bhp.

Today’s announcement also coincided with a special launch video depicting the first-generation car entering the Channel Tunnel with the new car exiting on the other side.

Maximum power – 250 kW, equivalent to 335 bhp
Race mode (maximum power available) – 200 kW, equivalent to 270 bhp
Maximum power regeneration – 250 kW
The amount of energy that can be delivered to the MGU (the motor) by the RESS (the battery) is
limited to 54 kWh. This will be permanently monitored by the FIA.
Maximum speed – 280 km/h (174 mph)
Acceleration – 0-100 km/h (0-62 mph) in 2.8 seconds
Tyres – Bespoke 18-inch MICHELIN Pilot Sport tyres for use in both wet and dry conditions.
Brakes – Brembo package; bespoke carbon discs and pads 278 mm in diameter at the front and
263 mm at the rear, callipers and tandem master cylinder – brake-by-wire at the rear.