In any elite sporting arena, precision and speed are key. This is especially true in the fast and frantic world of motorsport, where a mix of human skills and bleeding edge technology must work together to achieve success.

Formula E frontrunners Envision Racing got together with one of the world’s top footballers in the shape of Liverpool and England’s Trent Alexander-Arnold to get stuck into a unique series of challenges – powered by Palo Alto Networks.

Check out what happens when they compete against each other and also combine their abilities in a unique sporting experiment held at London’s Excel Arena, home of the London E-Prix.

New York City E-Prix victor and triple pole-position winner Nick Cassidy lined up against Trent on the indoor football pitch at London’s Excel Arena. Territory more than familiar for the Liverpool full back, but not the Kiwi race ace.

Still, that shouldn’t be a problem for Cassidy. His Envision Racing Audi e-tron FE07 Formula E car will go from standstill to 100km/h in around 2.8 seconds/ Trent is one of the quickest players in the Premier League, but surely no match for the world’s fastest electric racing machine.

A drone and multiple high definition cameras captured the 18 yard sprint, bringing a new dimension to a head-to-head sporting duel. And the outcome? Closer than you would think…

So close in fact that the pair set up a rematch with Trent taking a running start. And this time things were even closer! 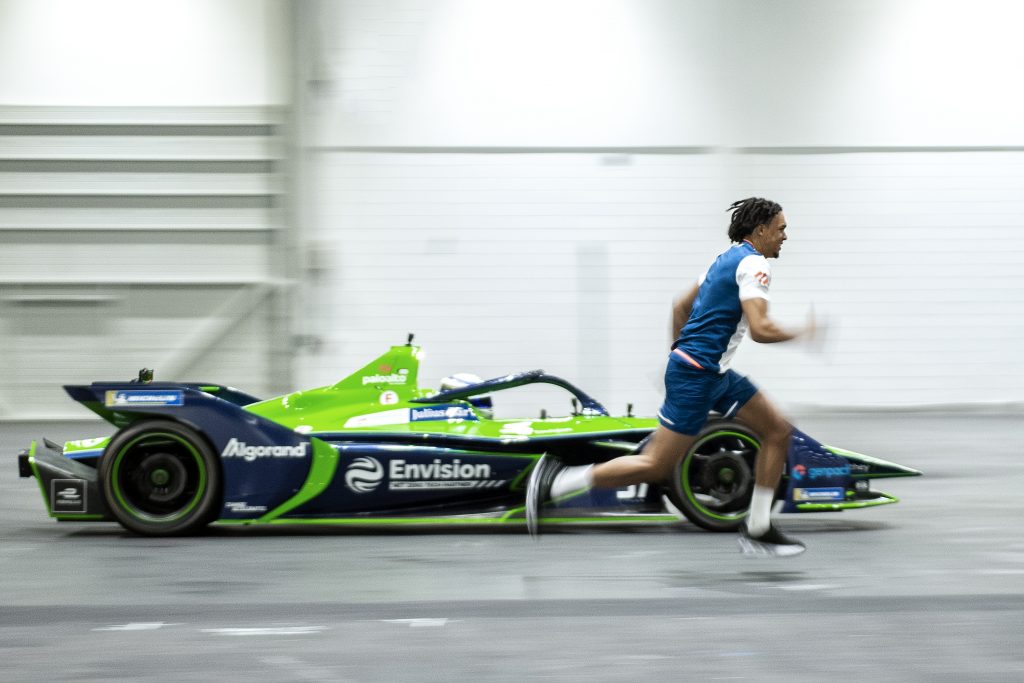 When Saturday comes, whether it is in the white of England or the red of Liverpool, one of Trent’s top talents is crossing a ball with such pin-point accuracy, his attackers just need to guide the ball into the net.

No problem when whipping in a cross for Harry Kane or Mo Salah, but how about Envision Racing’s Nick Cassidy? Suited and booted, complete with crash helmet, in a speeding Formula E car.

With the crosses flying in and Nick and his car getting closer, the question is – can the Envision Racing driver hit the back of the net in a world first footballing feat?

Check out the video here…