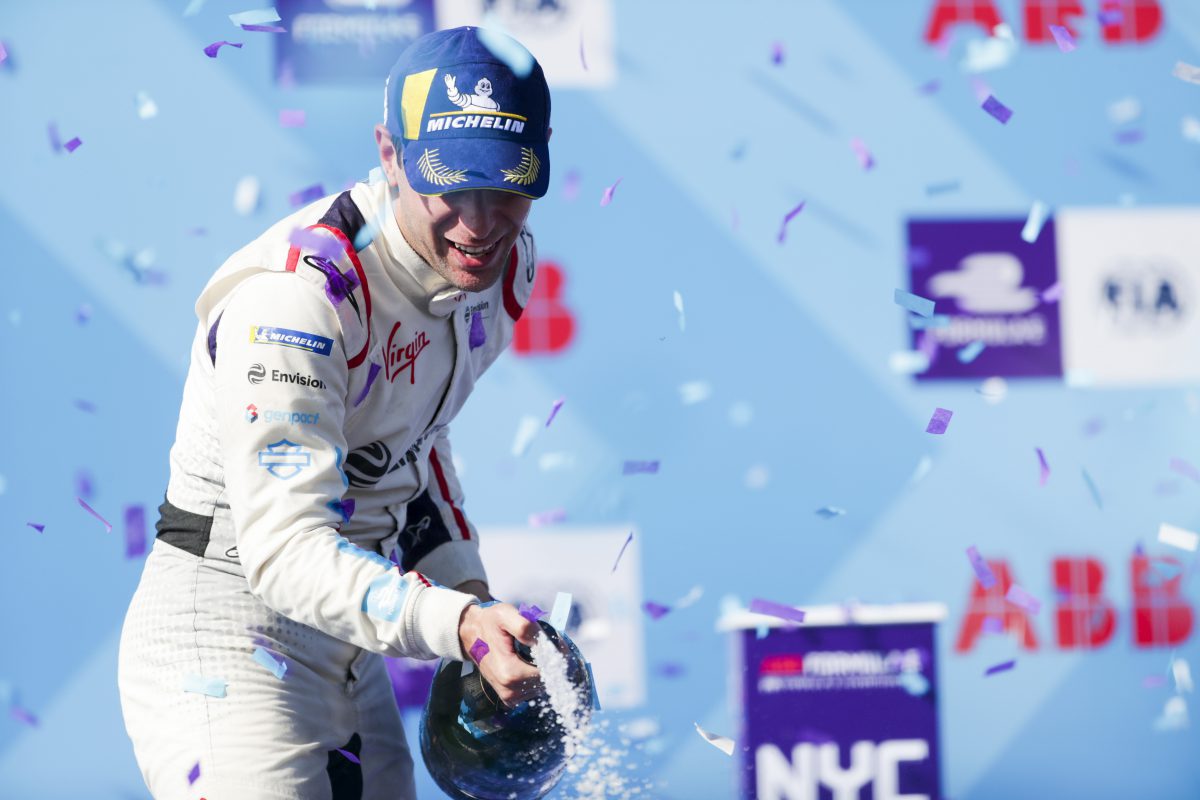 INTERVIEW: ROBIN FRIJNS RECAPS ON THE PERFECT END TO HIS SEASON

We were able to end off the season in fine style at New York last, which was definitely one of my career highlights.

To take the win and stand on the podium looking down on my Envision Virgin Racing crew and with the backdrop of Manhattan in the background was pretty cool.

It was the second win of my Formula E career and it was really sweet one after some recent frustrations on our side of the garage.

I can’t tell you how low you can get when you have races like Bern last month and it’s all over after a few meters.

But then isn’t racing funny! A few weeks later and there we were on top of the world celebrating a second win after a really perfect race.

Coming to New York it was a really busy period for me. I’ve been racing non-stop for many weeks now and will be until the end of the month.

But personally, I can’t get enough of this sport so I am not going to complain about it. I live to race and that will never change.

I think the less I write about the Saturday race the better, to be honest. It was definitely one to forget and was another episode of misfortune for us with an issue which ended our race after 15 laps.

But of course, the great thing about a double-header is that you don’t have a lot of time to stop and think about the disappointment because you go straight back into the cockpit and go again.

We had the feeling that we could be real challengers in New York because we found a nice setup and once the track had evolved a bit we were really hooked-up.

Qualifying was good and I was able to push really hard. You probably saw that the lap I did in Super Pole was committed. I really pushed it hard because I wanted to show that we had got qualifying licked after some recent disappointments.

There was a brief touch on the wall but you have to push the boundaries on a track like New York. [Alexander] Sims took the pole so fair play to him but we were in a comfortable place in second and less than a hundredth of a second from his time.

We knew the start might be challenging due to the grid slot being off-line and, sure enough, I got a poor launch and was taken by Buemi into the first corner.

I settled into third place quickly realizing that Sims was not showing any pace that was really going to let him control things from the front.

Buemi was quick in places but not so on the slow stuff and when I took my second attack boost I managed to send one down the inside into the first corner.

It was pretty dusty off-line and you are never sure if you are going to get the car stopped but it worked out perfectly and I then went after Sims.

Straight away I could see that he wasn’t super quick, so again I brought out my Turn 1 plan on him and did a similar move as I did to Buemi.

It worked beautifully again and despite a little bit of contact, I was through and into the lead. That felt good because Paris seems like a very long time ago and, as they say, once you get a taste for winning it gets pretty addictive.

From that point on it was a case of managing the tires and the energy carefully. I was fortunate enough to get a gap on Sims and it was a reasonably comfortable run to the chequered flag.

The celebrations were great and I am just so pleased for the whole Envision Virgin Racing team because each and every one of them has worked incredibly hard this season.

We were the only team that had both drivers winning races and we secured third place in the championship which was great for us.

People forget that we had only a few days testing before the start of the season, so for us to come this far as a customer team is pretty special.

We had a nice time at the awards ceremony on Sunday night and I should say a big congratulations to Jean-Eric Vergne and DS Techeetah for their title success.

It has been an incredibly competitive season with so many close races. Formula E has really changed massively since Season Two when I started. The rise in quality and professionalism in every department has gone up hugely.

It was an added bonus to seal fourth place in the drivers’ championship but, as I said, the teams’ standings achievement is the one we should all be really proud of.
Now we regroup and get ready to go again in Season Six when it will go up another level, I’m sure.

You can rest assured that Envision Virgin Racing will be pushing mighty hard to get more wins and taste more success.