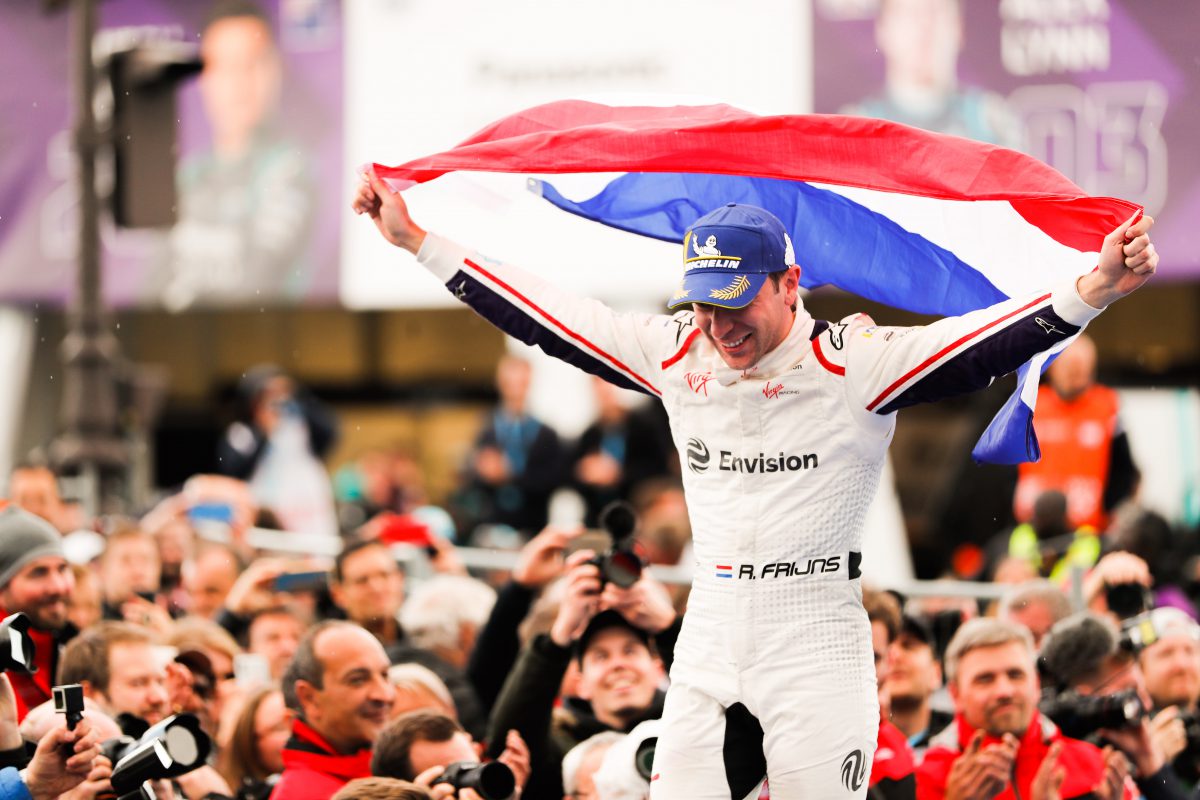 INTERVIEW: ROBIN FRIJNS ON WHY PARIS WAS THE TOUGHEST RACE OF MY CAREER

It was altogether a very memorable day in Paris last Saturday and one I’ll always remember.

Apart from the fact I won my first Formula E race, I can honestly say it was the toughest race of my career so far.

It had been very slippery in FP1 when everybody went off and I crashed as well in the very tricky conditions. We therefore knew that the rain would make the track conditions very difficult and it was just about survival really.

I must say that the Envision Virgin Racing guys really pulled together with me big time in qualifying.

I’ve said it a few times earlier in the season that I need to improve my overall performance in qualifying and we managed to look at a load of data and work together with the engineers in order to make that happen. It worked!

I did a pretty good lap in qualifying and Super Pole and after the Mahindra penalties I lined up in third position behind the two Nissan cars.

The race started behind the safety car due to one side of the track being wet and the first few laps were straight forward. At first I wasn’t sure it was necessary but ultimately it was right and fair for the whole field.

[Oliver] Rowland went off early on and I was up to second position and able to get really close to [Sebastien] Buemi.

When he went for the Attack Zone he pulled across and there was a light touch between his rear wheel and my front wing.

I was definitely concerned at the noise because when I had the touch, I could hear the front nose actually touching the ground quite a bit, so I was a bit scared that it went under the car at one point.

I was asking the team, ‘like how is my front wing looking?’ and I was looking at the TV when I was on the straights to see how it was.

But after four or five laps it didn’t get any worse so I was quite confident that I would have no problems during the race. Then the rain came!

It is hard to describe just how tough it was just to stay on the track. We were just sliding around pretty much all the time in the puddles.

In addition, the temperature was pretty cold so it really was like ice driving and when you are leading and you’re the first guy who is inspecting the corners the concentration needed is super intense.

On city tracks because you have different asphalts and you have painted white lines it’s very easy to get your car at the wrong angle and just lock-up and go straight to the scene of an accident.

Added to this pressure, just stay on the track, I had Andre [Lotterer] right with me and the last guy you want on your tail is someone with his experience and fighting instinct.

The Full Course Yellows were actually a chance to rest a little but I couldn’t drop my focus even then because there was always this black and gold car in my mirrors.

Then the safety car came out late in the race and I lost the gap I had managed to pull out.

It was like someone was testing me on every possible scenario just to win this race!

Another FCY followed and part way around the last lap it went green again so there was just no let-up in concentrating on getting to the finish line.

But we got there and the feeling of relief was massive. To win my first Formula E race in these circumstances was extra special.

The Audi e-tron FE05 has been a brilliant car so also a big thanks to Audi Sport for providing a really fine package their end.

On the slow down lap I picked up a national flag of the Netherlands which felt great to fly from the cockpit, especially as it was Kings Day, which is a big deal back home.

We had a nice celebration after the race with the team but now it is back in to focus mode in this busy period as I head to Hockenheim for DTM this weekend and then prepare for the Monaco E-Prix.

I am sure it will take some time for the win to sink in, especially in such dramatic circumstances.

Overall though it is a great team effort and for that I wholeheartedly want to thank Envision Virgin Racing who are such a great team to be part of.