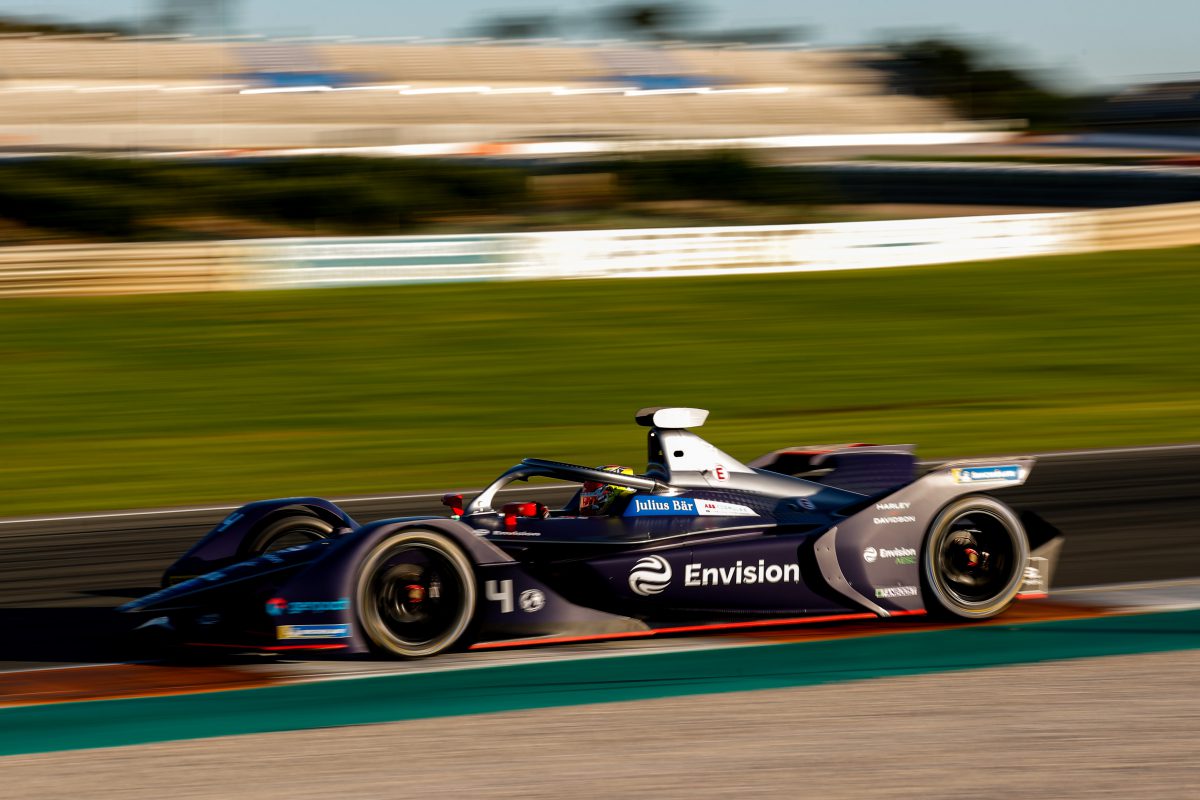 GUIDE: ALL YOU NEED TO KNOW TO FORMULA E TESTING

Formula E and Envision Virgin Racing are back! Ninety-three days since Robin Frijns took victory at the final E-Prix of season five and the all-electric championship sparks back into life for season six, beginning with official pre-season testing this week.

Together with team-mate Sam Bird – now featuring a new-look beard – the driver pairing will once again be at Spain’s Ricardo Tormo Circuit, just a few miles west of Valencia, Spain, for three days of running.

The 3.094km circuit features 15 turns including an artificial chicane aimed at mimicking the tight and twisty tracks Formula E is used to. There is also a ‘make-shift’ Attack Zone at Turn 5, again to help add to the realism but, after all, this is a permanent track making the data gained only so relevant.

That said, renowned for its sunshine, the capacity 12 teams and 24 drivers should expect plenty of dry running, potentially racking up to more than 1,000km each.

So, to make sure you keep-up-date with what’s going on. Here’s our handy guide to Formula E testing…

How can I keep up to date with live timing and is there a social media hashtag?
Fans can follow live here, as well as via #FETesting on social media. They’ll also be full reports on the team’s website at the end of each test day, together with regular updates on the team’s social channels.

What exactly are teams doing over these three days?
That’s a tricky one as with the competition even higher this year, there’s lot of closely guarded secrets up and down the paddock. In short, these are the last three days teams can test and tinker with their cars before they head off for the first race. They’ll also not return to their respective workshops until the end of the season so these really count. It’s also the last opportunity to iron out any gremlins, but more importantly, finalise their qualifying and race run set-ups ahead of round one.

So, what is a good benchmark time?
Well, the best Gen2 lap time from last year was a 1:16.977s set by Antonio Felix da Costa. That said, being quickest in testing doesn’t always translate come the racing, so it’s hard to read too much into this. It’s also hard to know exactly what each team is testing and what power modes they are running at.

And what’s new for this season?
Lots! Firstly, it will be the first time there has been a capacity grid of 12 teams and 24 drivers and the first public running for the new Porsche and Mercedes teams. As well as new teams, there are also new drivers in the paddock with the likes of rookies James Calado (Jaguar), Nyck de Vries (Mercedes), Brendon Hartley and Nico Muller (Dragon), as well as a few other movers and shakers. There are also three new cities this season with Jakarta, Seoul and London.

In terms of rules and regulations, there’s not too many changes but the main one is with regards to changes to energy usage during Safety Car and FCY periods. Unlike last season, now if for example, the safety car is out on track for six minutes, all drivers will have 6kWh subtracted from their remaining energy when the race restarts. The other change is an extra 10kw (so up to 235kw) for drivers when in Attack Mode.

What if testing is not holding onto my full attention and I want to explore nearby Valencia?
Do! It’s a fantastic city with many hidden gems. For one, it’s actually Spain’s centre for economy – mainly thanks to its port, ahead of Barcelona and Madrid. Dating back to 138 BC, Valencia was founded by the Romans and now is a bustling, vibrant city that boasts everything from being the site for Europe’s narrowest building – at just 107cm – to having two American Football teams!