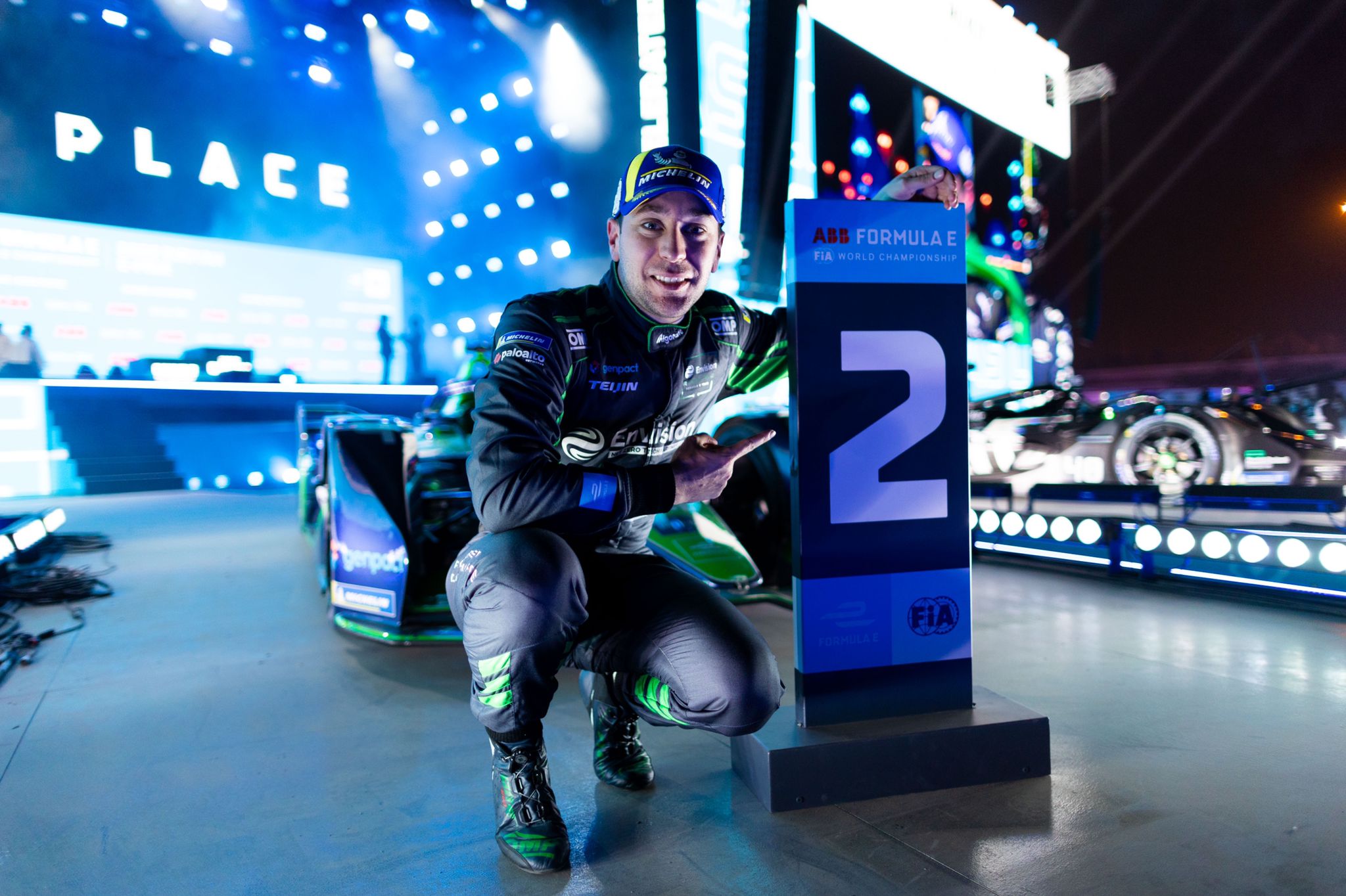 Envision Racing’s Robin Frijns could taste victory in the second round of the 2021–22 ABB FIA Formula E World Championship in Saudi Arabia, only for a late-race safety car to dash his chances of claiming the top spot.

The streets of Diriyah served up an absolute classic battle in the second round of the 2021–22 ABB FIA Formula E World Championship, and Envision Racing’s Robin Frijns drove superbly to mix aggression, speed and maturity to score big points and seal his first podium finish of the year…but a race victory was well within reach for the Dutch driver. 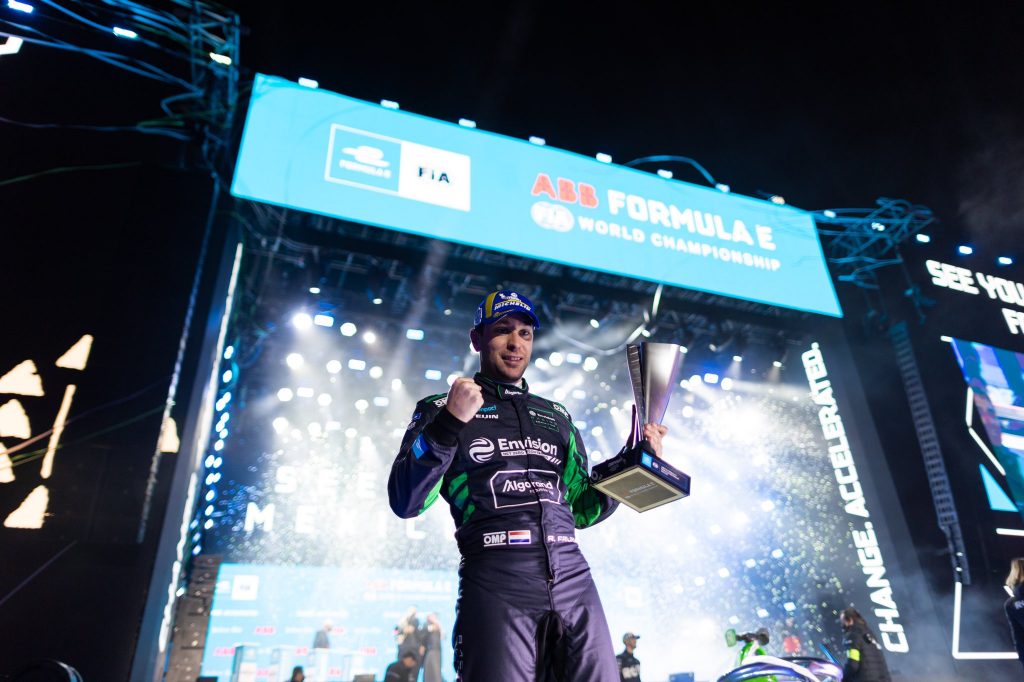 From his third place starting slot, Frijns artfully fended off a strong advance from Lucas di Grassi, successfully holding position behind Mortara and becoming the meat in a Venturi sandwich.

Frijns elected to take his first Attack Mode seven minutes into the 45-minute-plus-one-lap E-Prix, dropping to fourth, but re-establishing himself in third one lap later as di Grassi employed Attack Mode, gaining an extra 30kW of power. Within the opening 10 minutes of the race the top eight drivers all chalked off their first of two Attack Mode phases.

Frijns became the second of the frontrunners to take his second Attack Mode, once again dropping behind di Grassi and clocking up the fastest lap of the race in the process as the top four drivers all dramatically came together under-breaking for the first sequence of corners.

The battle for the lead! HARD RACING between @nyckdevries and @LucasdiGrassi ⚔️⚡️

After everything settled down, di Grassi found himself in the lead and Frijns emerged in fourth after contact with Mortara, and the Envision Racing driver piled the pressure on early race leader de Vries.

Seemingly wounded from the earlier contact with Mortara, Frijns lost out to Andre Lotterer, and despite a valiant piece of defending, could not resist the pace of the Porsche driver, but one lap later Frijns re-passed Lotterer to reclaim fourth.

21 laps in, any concerns regarding the pace and structural integrity of Frijns’ Audi e-tron FE07 were quickly put to one side and the number four machine was quickly hassling the Mercedes of de Vries, and passed as his compatriot took his second Attack Mode with under 20 minutes remaining on the clock.

In short order, Frijns was right with second place driver di Grassi with the lead in sight – equally looking to attack for second, and defend his third place from de Vries as the race entered the final 15 minutes. 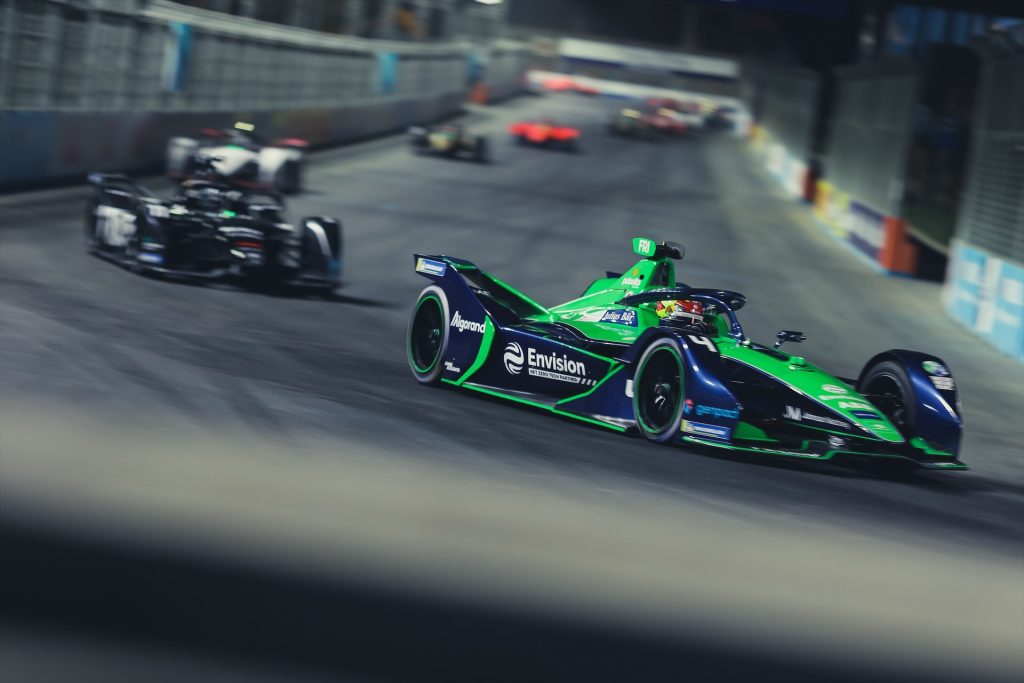 As Frijns’ mirrors became full of a squabbling jean Eric Vergne and de Vries, the Envision Racing driver was afforded some rare respite as the action on track became increasingly heated. Entering the final 10 minutes Frijns had survived the drama to be well within a shot at victory.

Frijns claimed second, passing di Grassi with a great opportunistic move and set about race leader Mortara until a safety car was triggered as Alexander Simms’ car became stranded on the circuit.

Simms’ crash all but doomed Frijns’ bid for the race win, and a lengthy clean up operation meant the race effectively finished behind the safety car, denying the Envision Racing driver a shot at overtaking the eventual race winner Mortara. 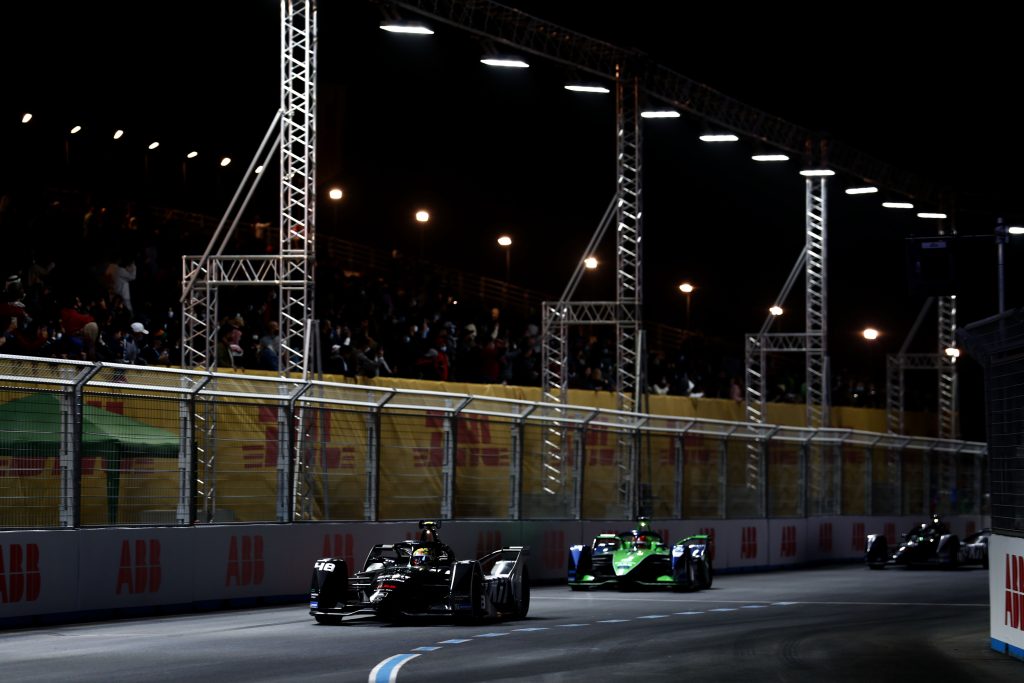 “After a difficult day yesterday, scoring no points, and seeing how quick Mercedes were, we knew it would be a tough job today,” reflected Frijns after the race.”I was trying to hang on with the guys in front and I felt very confident with the car. When the safety car came out I was hoping for maybe one or two more laps as I felt we had better grip that the cars around us, but that didn’t happen and the team did a really great job, and in the end I finished second – i’m over the moon!”

Frijns’ team-mate Nick Cassidy suffered distinctly opposing fortunes after his Sunday afternoon in the the desert. The Kiwi ended up 17th, after being forced to start from the rear of the grid following a crash in FP3 and missed out on qualifying.

Following on from a starring turn in qualifying for race one, and a solid race pace, ending up sixth on the grid and seventh in the race, the Envision Racing driver will be looking to the next race in Mexico to get back to points-scoring ways.