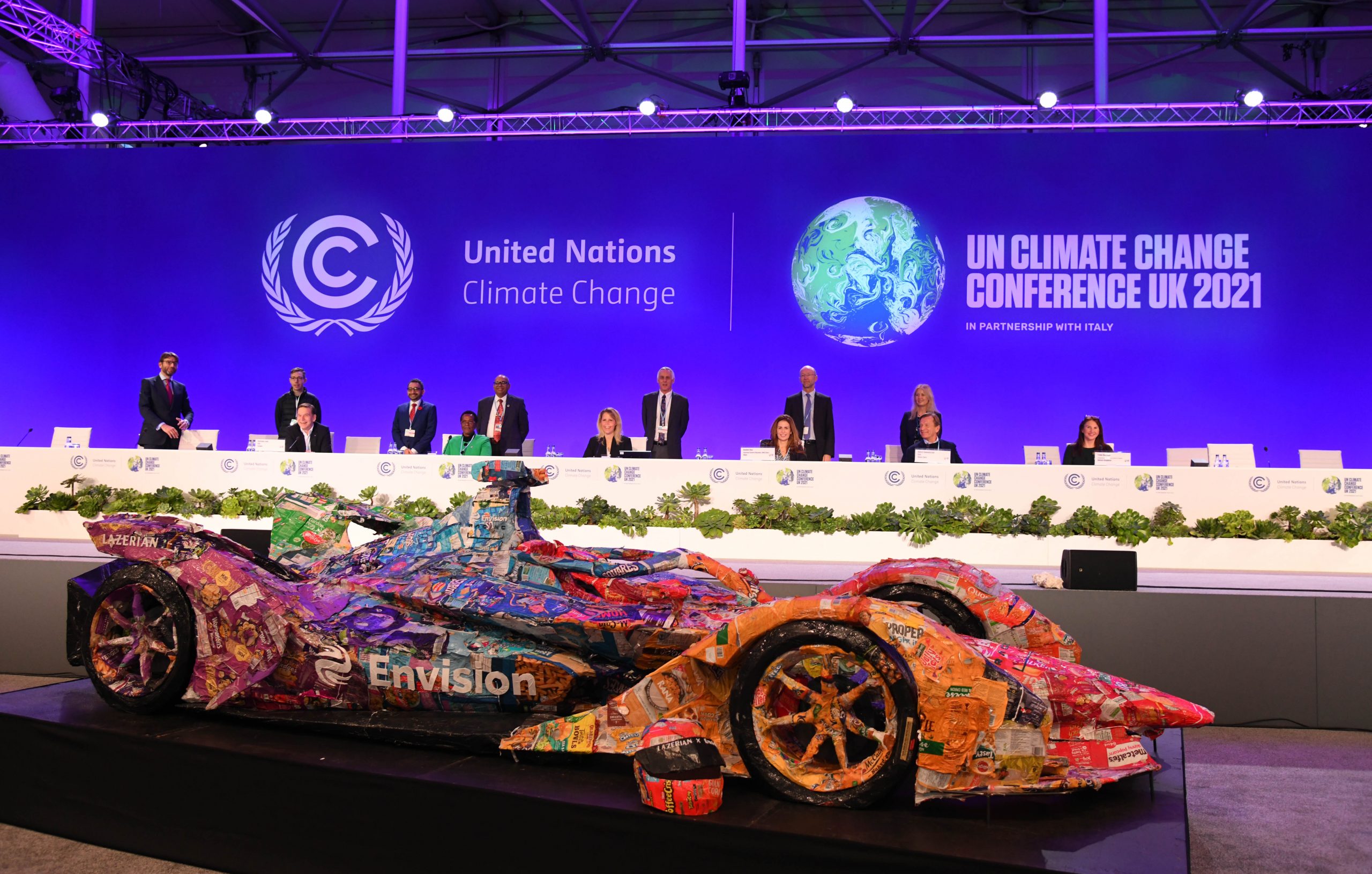 As COP26 closes today, Envision Racing has unequivocally set a new standard in sport, leading the way for sustainability in the sports industry through its involvement in the global climate summit.

The only team in world sport to partner with COP26, Envision Racing had a presence across the blue and green zone with four separate exhibits. The team has elevated the issue of climate change in an inspiring, educational, and exciting way and demonstrated the overwhelming impact Formula E and motorsport will have on the transition to clean mobility.

Envision Racing’s Road to COP26 started 12 months ago, when the team proudly announced it was adding COP26 branding on its car to inspire an electric vehicle revolution and raise awareness of the summit through its global platform.

The team also ran several Race Against Climate Change (RACC) community initiatives to elevate young voices and demonstrate the importance of youth engagement in the race against climate change. This culminated in its marque RACC live event in partnership with COP26 and the UN, which involved leading climate change thought leaders and figureheads including Dr Jane Goodall, Alok Sharma and Patricia Espinosa.

Other highlights have included the team’s support of the COP26 UK Presidency with involvement in the ‘One Step Greener’ programme. The team’s development driver Alice Powell became one of the first ambassadors and attended Number 10 Downing Street in Envision Racing’s Gen 2 Formula E car to launch the initiative. The team also partnered with Harrods, the world’s most prestigious department store, to raise awareness of zero-emission vehicles with its Clean Mobility window exhibition ahead of the London ePrix and COP26.

The team welcomed leading climate scientist Johan Rockstrom, who unveiled the team’s new season 8 car in the green zone on the opening day of COP26. “We’ve had 150 years of fossil fuel burning in the oil, coal and gas era – the pinnacle of this is the internal combustion engine,” said Rockstrom. “In comes Formula E to show that transitioning to a safe climate future is unleashing new innovation, which takes us to a higher level of accomplishment.”

Now a symbolic image from the COP26 event, Envision Racing was also the team behind the Recover E race car – a scale replica which was made entirely from single-use plastic collected on litter picks across the UK led by schools and youth campaign group, Kids Against Plastic. The car engaged communities and world leaders before featuring on BBC One’s The One Show on 4th November 2021, highlighting the role plastic plays in the race against climate change and encouraging pledges as part of Envision Racing’s Sustainable Chain. More than 20,000 mangrove trees will be planted in the Amazon because of the impact of this initiative over the past two weeks.

The success of Envision Racing’s COP26 campaign has been down to the impactful and creative activations, which have communicated the team’s messages to far-ranging audiences, meaning more people than ever before have engaged with Formula E as a sport. In turn, the team has leveraged the excitement and intrigue around Formula E and its growing fanbase to drive new and hard to reach audiences to engage with COP26.

Underpinning this activity is the scale of innovation from the Envision Racing team.

COP26 saw the launch of the world’s first two-seater electric race car and a game-changing battery that has about 20% greater energy density than electric vehicle technology on the road today. This equates to faster recharging and allows cars to travel further and is the key to transitioning to clean mobility on the roads.

Envision Racing’s Managing Director and CTO, Sylvain Filippi said: “Transport is one of the biggest contributors to climate change, with billions of tonnes of carbon dioxide produced in 2020 from global mobility. We believe that for every pound invested in R&D and innovation in Formula E, we will significantly accelerate the world’s transition to clean mobility. What’s more, Formula E has the power to make the race against climate change an exciting and entertaining one. It’s a huge privilege and equal responsibility for our team to lead the way in championing this cause and setting new standards.”