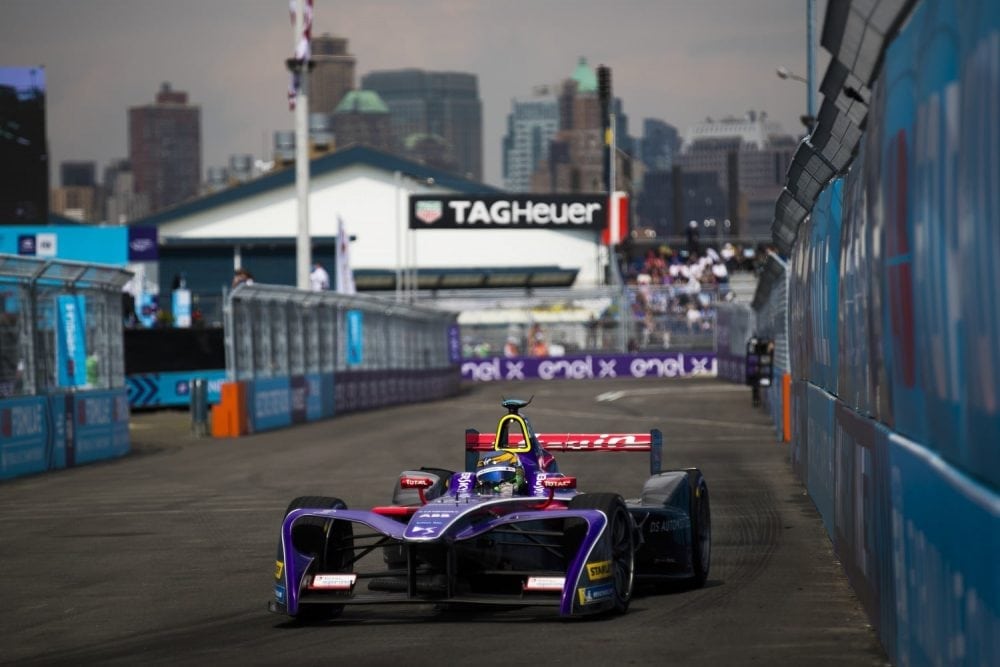 DS Virgin Racing rounded out their best ever season during today’s final Formula E race in New York City, securing third place in both the teams’ and the drivers’ championship.

British driver Sam Bird picked up another points finish with 10th place but finished just one point adrift of rival Lucas di Grassi to narrowly miss out on the championship runners-up spot.

The final race of the season – the championship’s 45th since beginning in 2014 – took place in Brooklyn’s Red Hook district, with drivers this time facing tricky, wet conditions in the morning sessions compared to yesterday’s heat wave. Yet come race time, the grey clouds had been replaced with blue sky, meaning the series has incredibly still yet to experience a wet race in four seasons.

Bird lined-up on the grid P8 with team-mate Alex Lynn down in P18 after a difficult rain-affected session. As the race got underway, Bird got away cleanly to be running inside the top 10 with Lynn unfortunately having to carry out a stop/go penalty for a gearbox change. That dropped him down the order with energy saving once again proving key for the 43-lap race.

Come the mid-race car swaps – the very last time these will take place in the all-electric series – both drivers made clean changes and set about settling into the later stages of the race. Up ahead, Bird tried hard to move further up the order as he challenged for second place in the championship, but was unable gain ground, coming home in P10, with Lynn crossing the Lynn in P14.

“This weekend has not gone the way we wanted but it’s still been an amazing season,” said Bird. “If someone had told me at the start of the year that I’d be coming into the final weekend as a title contender I never would have believed them, but we were and that’s down to the hard work of everyone in the team. They’ve got the most out of the car and taken every opportunity that’s come our way and that’s a great achievement.”

Lynn said: “For sure it’s been a difficult weekend for us, but as always we gave it our best shot and my thanks goes to the team for their commitment this season. As my rookie season, it’s been a steep learning curve but for sure an enjoyable one.”

Sylvain Filippi, Managing Director of the team, said: “It’s been a fantastic season for DS Virgin Racing and all this wouldn’t be possible without the hard work and dedication of each and every team member, and of course the support of our partners; DS Automobiles, Hewlett Packard Enterprise, Total, Kaspersky, STANLEY, Alpinestars and One All Sports. To do what we have this season, in such a closely fought series, is a great achievement and, although this weekend didn’t quite give us the results we wanted, we can be very proud of what we have accomplished.”

DS Performance Director Xavier Mestelan Pinon added: “At the end of an incredibly competitive season, DS Virgin Racing and Sam Bird are in the top three of both championships. With two victories and four podiums, the team have delivered a great performance. We are progressing in an increasingly competitive and demanding environment, which is extremely promising. Our congratulations go to Jean-Eric Vergne and to Audi who won this year’s driver and team championships.”

Today’s race marked the final round of the fourth Formula E season and the last with the generation one car. It also signifies the last time the drivers will undertake car swaps due to the technology improvements with next season’s car.

The new season gets underway in December in Riyadh, with pre-season testing commencing in October.