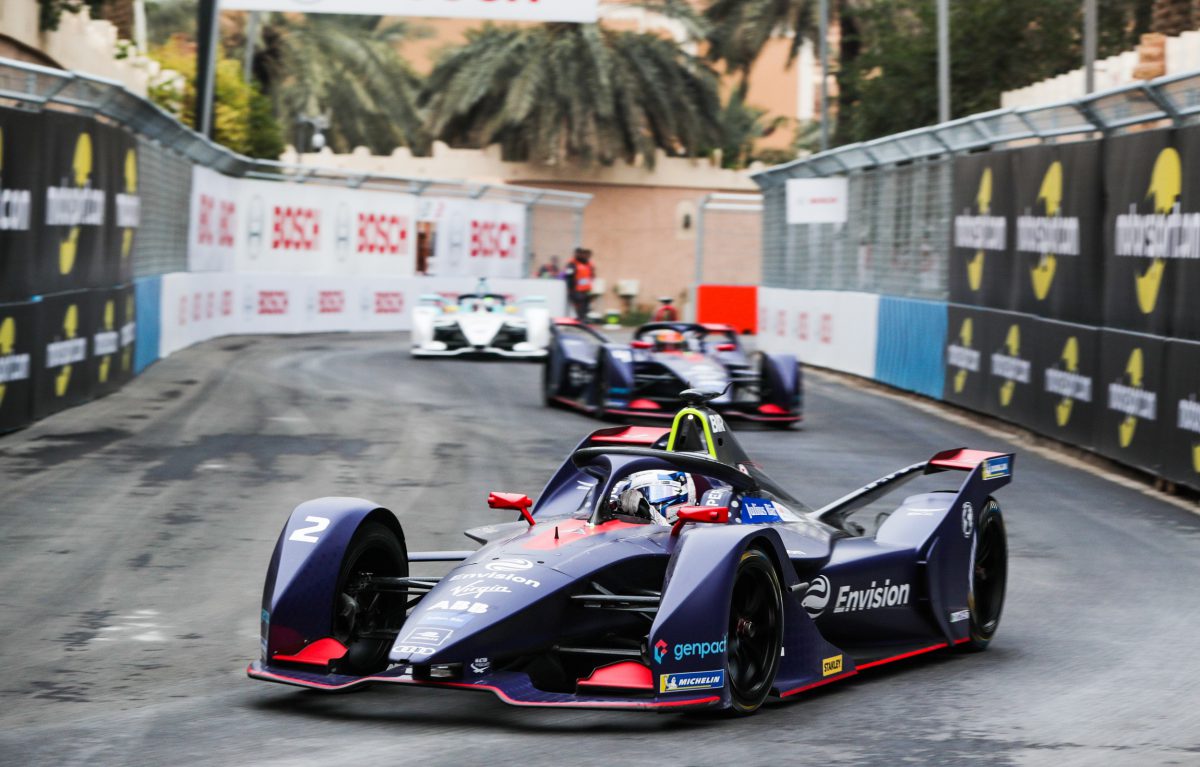 Envision Virgin Racing drivers Sam Bird and Robin Frijns made up an impressive 16-places – and narrowly missed out on a points finish – during today’s opening and rain-affected Formula E event in Ad Diriyah. British driver Bird crossed the line just outside the top 10 – a mere 0.183s behind – after carving his way through the field, with team-mate Frijns also showing a glimpse of the duos true potential to finish 12th.

Despite being one of the driest countries in the world, remarkably the paddock was met with a severe downpour in the morning causing the opening practice session – and with it valuable running – to be abandoned. As the rain eased slightly, a second, delayed practice session then followed which, despite being stop/start, saw Sam Bird finish a promising P2.

With the original schedule now disrupted, qualifying had to be condensed from four to two groups, as well as a cancellation of Superpole, in order to reduce time before the fixed race start time. Going out in the first group, both Bird and Frijns pushed as hard as they dared in the tricky, wet conditions and – despite the drying track benefiting those in the second group – manged to finish provisional fifth and seventh respectively. However, both drivers suffered a power overshoot during their qualifying runs after hitting a bump and, despite not gaining an advantage, they were each handed a grid penalty pushing Bird to 19th and Frijns to 20th.

Come the race, and the new challenging 45-minute plus one lap format, both drivers enjoyed a positive start and set about working their way through the field. Driving Audi’s e-tron FE05 car, the pair soon started to make progress running 15th and 16th by the halfway stage and continuing to edge closer to the top 10. In the closing stages, Bird was now right on the back of 10th-place Nelson Piquet Jr showing strong race pace but was just unable to find a way passed as the chequered flag waved.

Bird said: “We gave it everything today but sadly the result wasn’t the one we were hoping for. I know if we would have started higher up the grid it could have been a different story. The team have worked incredibly hard all weekend and the changing conditions today have certainly been a challenge with the lack of running, but we’ll regroup and come out fighting at the next race.”

Team-mate Frijns said: “That was a tough day for us but there’s still a lot we can take away from the weekend and the pace we showed is certainly encouraging. Qualifying, in particular, was tricky and then being bunched up in the mid-pack made things harder, but we know the pace is there and what we need to work on.”

Sylvain Filippi, Managing Director and Chief Technology Officer at Envision Virgin Racing, said: “There’s a lot of positives we can take from this weekend, despite not getting the results we wanted. We showed strong one-lap and race-pace in both wet and dry conditions, and we’ve now got plenty of crucial race data to pore over. The issue in qualifying for sure made our day a lot tougher, but we know the speed potential is there and we’re looking forward to showing this in Marrakesh in the New Year.”

Envision Group’s Franz Jung and Chairman of the Board, who was on site to support the team, added: “The drivers gave it their all today making up 16-places and showing the strength of the car’s package. Well done to Sam and Robin, and of course to the team for all their hard work.”