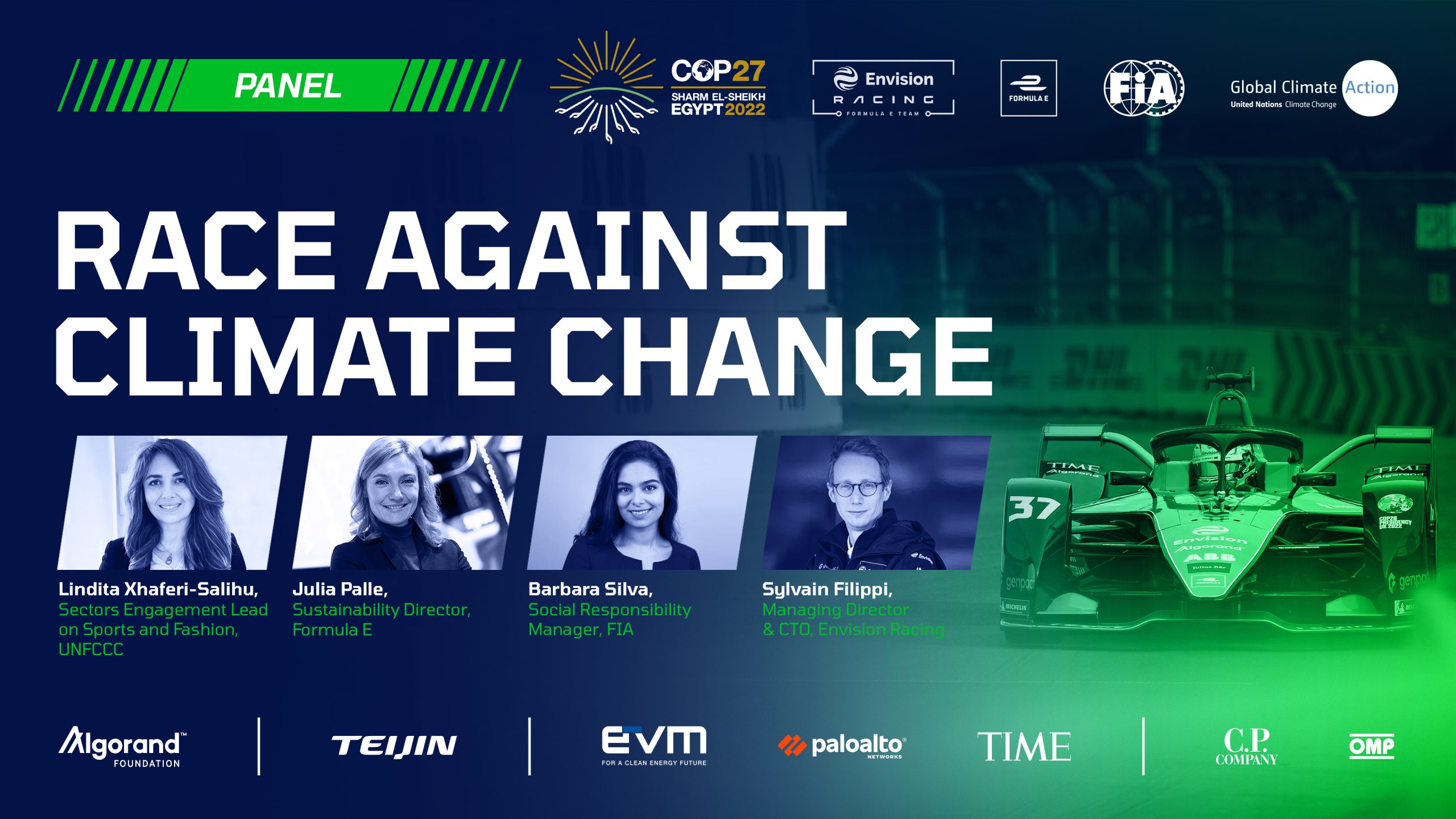 At COP27, Formula E sets a fast pace in the race against climate change

As world leaders gathered in Egypt for COP27 to find ways to reduce greenhouse gas emissions globally in an equitable way, Envision Racing’s Race Against Climate Change convened for a high-level discussion about the progress being made by the motorsport industry and the positive role of Formula E.

Meeting in Sharm El Sheikh, Sylvain Filippi, Envision’s Managing Director and CTO, was joined by Barbara Silva, FIA’s social responsibility manager, and Julia Pallé, sustainability director of Formula E. The lively discussion covered a broad range of topics, from the importance of technology transfer to advances in the development of batteries.

But the big question for the panel was whether the race to an electric future is being won. Sylvain was in no doubt that huge progress is being made, with Envision Racing and the Formula E FIA Championship playing a significant part in positive developments in battery technology and innovation.

“If you look at what we have done in eight years, the car we are about to race next year is more than three times the power of the car seven years ago,” said Sylvain. “It is much lighter, it is smaller and it compares very favourably to the best racing cars you can think of in terms of performance.

“If you had told that to anyone seven years ago, they wouldn’t have believed you.”

Technological progress on the race track is also evident in the electric and hybrid road cars that motorists are now able to buy. “The road map towards electrification is accelerating even faster than we thought,” said Sylvain. 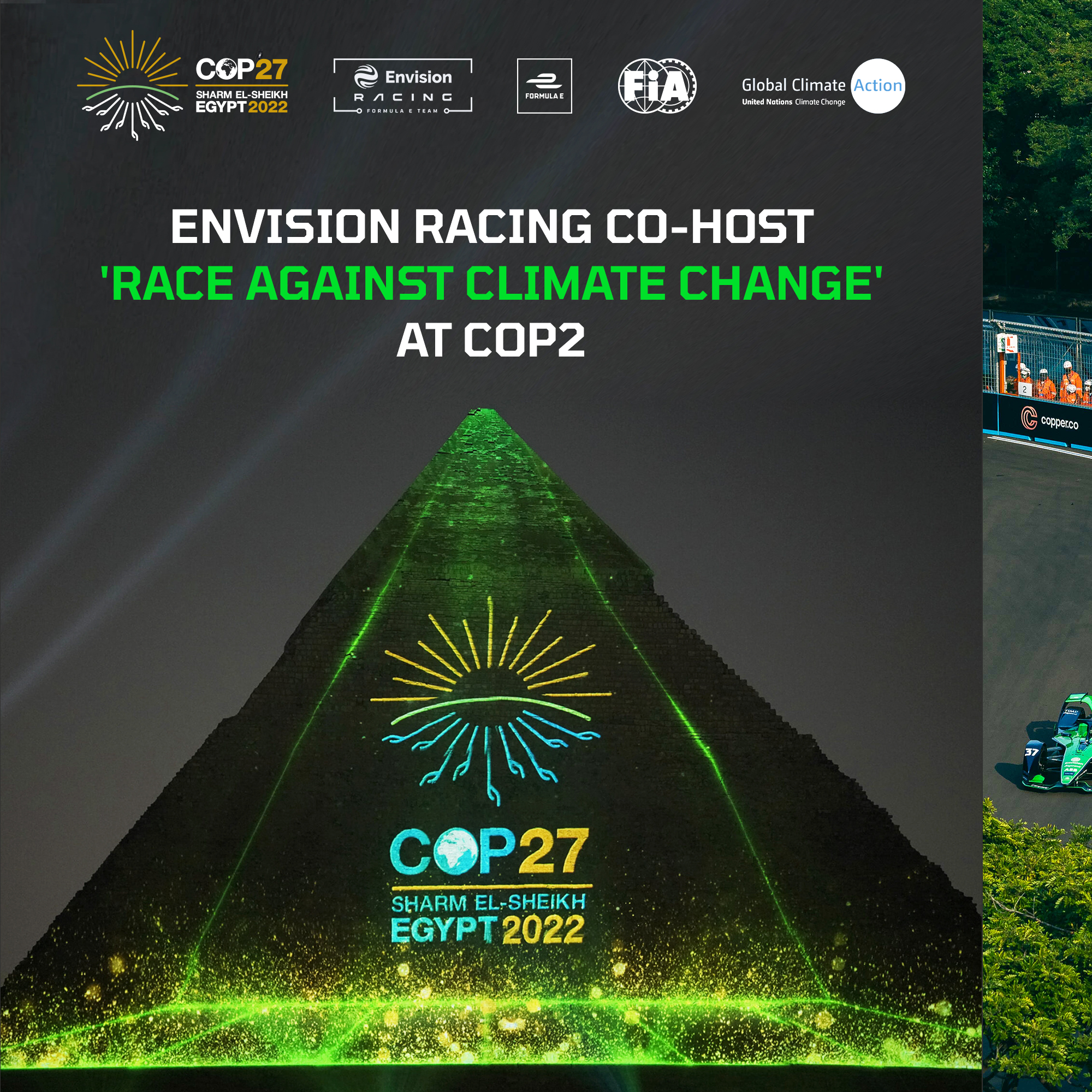 Julia explained that the mission of the Formula E championship is to demonstrate that there are solutions to fight climate change which allow you drive a good car while still making the best choices for the environment.

“Formula E is a fantastic platform to accelerate and push messages to the millions of fans who are watching the sport, because there’s many more people watching sport than reading science or able to understand an IPCC report,” she said.

It is vital for the automotive industry to play its part in sustainability, she said, with transport responsible for between one-third and a quarter of carbon emissions globally. “Motor sport is demanding but also so innovative, agile and creative. We can find those solutions that will benefit the rest of society.”

Barbara highlighted the importance of technology transfer, and the impact on climate change being made by engineers hard at work in the garage on making racing cars more efficient, both in Formula E and in Formula 1. Her recent report on technology transfer had identified a broad range of applications for motor sport technology in other areas of our life; from efficient refrigeration in UK supermarkets to advanced carbon fibre which has reduced the weight of passenger seats in commercial aircraft.

“What this report shows us is that when commit the right people towards an issue and we apply the processes that we have, with our energy efficiency heart, then we can really be very much part of the solution when it comes to decarbonisation,” said Barbara.

There no longer was any real debate about the sustainable future of the automotive sector being electric, said Sylvain. “Everything is going electric.  Not just because we love electric, it is just science.  We can achieve 95% system efficiency from the battery to the wheel. That compares to about 30% for very highly tuned internal combustion engines, and most internal combustion engines run in really bad phases, they only reach peak efficiency when the engine is really warm. A lot of trips are made with efficiency that it is far, far worse.”

Although battery technology has changed little in recent years, new generation batteries were still much more efficient. The next few years would be about scale, he said, with new battery production capacity coming on stream as a result of multi-billion-dollar investment. “This is going to drive down the cost of batteries per kilowatt-hour. Then we’ll get there. So, good news, very clear on that. We know where we are going.”