Following significant investment from Envision Group and team owner Lei Zhang, leading Formula E team Envision Virgin Racing has completed expansion works on its Silverstone headquarters – including a new fully operational DIL (Driver in the Loop) Simulator – ahead of the opening rounds of the new season.

Designed to further develop and improve its already extensive race preparations, the UK-based team moved to its new state-of-the-art facilities – located just a stone’s throw from the home of British motor racing – in 2017 and has now put the finishing touches to the 12,000 sq ft premises.

Central to the expansion programme has been the installation of a cutting edge VI-grade race driving simulator, complete with monocoque and Halo, allowing the team and its drivers Sam Bird and Robin Frijns to prepare for the challenges of the championship’s temporary street circuits.

As well as accommodating more than 25 permanent staff, the base also houses the team’s Audi e-tron FE06 fully-electric race cars, workshop bays, spare parts, engineering offices and multi-media meeting rooms. All of which adhere to the ‘Very Good’ energy sustainability standards set by the government’s BREEAM agency, in line with the team’s long-standing environmental commitments and its Race Against Climate Change programme. In addition, the headquarters has three dual AC charging stations allowing up to six EVs to be charged at once.

The new 2019/2020 Formula E season gets underway this Friday and Saturday (22 and 23 November) with two races held in Diriyah, Saudi Arabia. Climaxing in London next summer, the sixth season of the series is set to be its most competitive yet with a capacity grid of 24 drivers and 12 teams going head-to-head across 14 races. 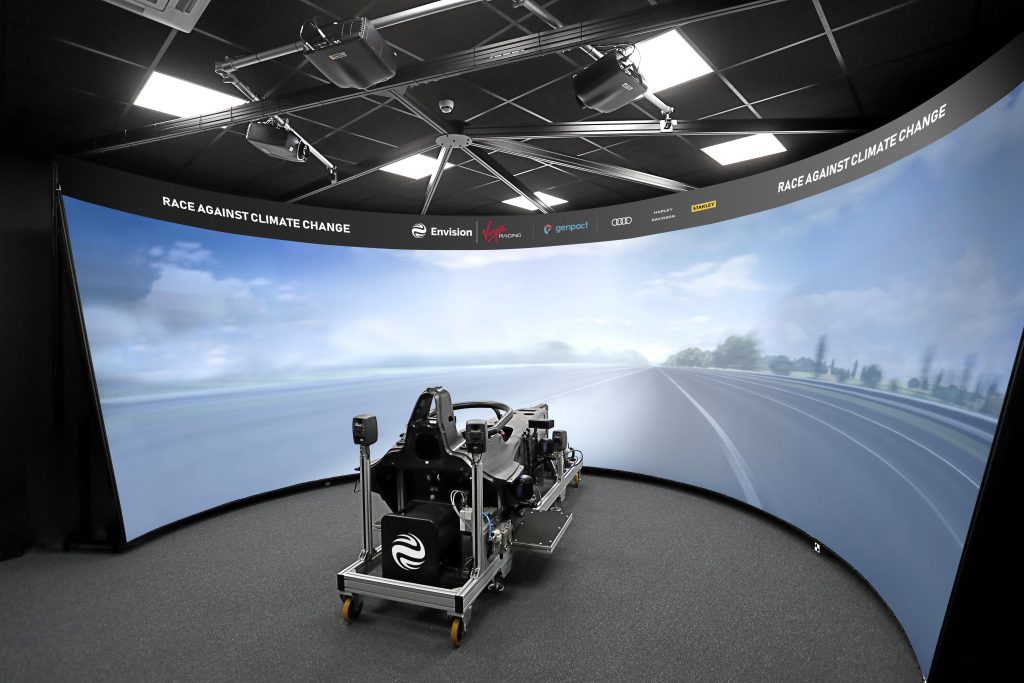 Speaking ahead of the new season, Envision Virgin Racing Managing Director Sylvain Filippi said: “As an independent team, to have finished third last season was a fantastic achievement, but we know the competition will be even tougher this time around, especially with the introduction of new teams and drivers. We know consistency and preparation is going to be crucial, make or break in fact, so we have put huge emphasis on this from our driver line-up through to our entire team personnel, and now of course with our simulator, which we expect to be a very important tool for race strategy preparation and driver training.”

He added: The team’s success is also down to the huge amount of hard work that goes in behind the scenes to each and every race, and we know we have all the ingredients in place for a really promising season. And to think that the first race of the new season falls on the fifth anniversary of our maiden Formula E victory will make the season opener even more special.”

British driver Sam Bird, 32, said: “Having spent the summer break focusing on my fitness and improving myself as an athlete, and after a strong programme during the pre-season test in Valencia last month, I am ready for the challenge that lies ahead. I am always committed to Formula E so with this great team behind me, a team-mate who challenges me and a race winning car, I look forward to adding to my eight Formula E victories and having the opportunity to win in front of my home crowd in London.”

Team-mate Robin Frijns, 27, added: “I really enjoyed my first season with the team last year and to pick up two victories was very special. The off-season has seen a great deal of effort from every member of the team to ensure we’re in the best possible shape and I think that showed during official testing. The season opener is going to be an interesting one as the Diriyah circuit is one of the most demanding out there, with so much to think about in order to hook up a quick lap, and of course new teams and drivers all with a lot to prove. For sure, it promises to be a great weekend for the fans, and we hope we can start the season off on a high.”

Guido Bairati, Vice President of Global Sales and Marketing of VI-grade, who supplied the team’s racing simulator, added: “We are very pleased to announce another success in the motorsport’s industry by reporting the completed installation of our driving simulator at Envision Virgin Racing as a turnkey solution. The installation includes proprietary software from VI-grade and related hardware components, as well as a cockpit provided by Envision Virgin Racing equipped with proprietary active belts technology from VI-grade. The STATIC simulator, including a set of Formula E digitized tracks, provides the team with a complete solution that enables them to virtually test and optimise the performance of their race cars, therefore allowing them to agree on, and then deliver, the optimal race performance. We wish Envision Virgin Racing Team all the best for the new upcoming Formula E season.”