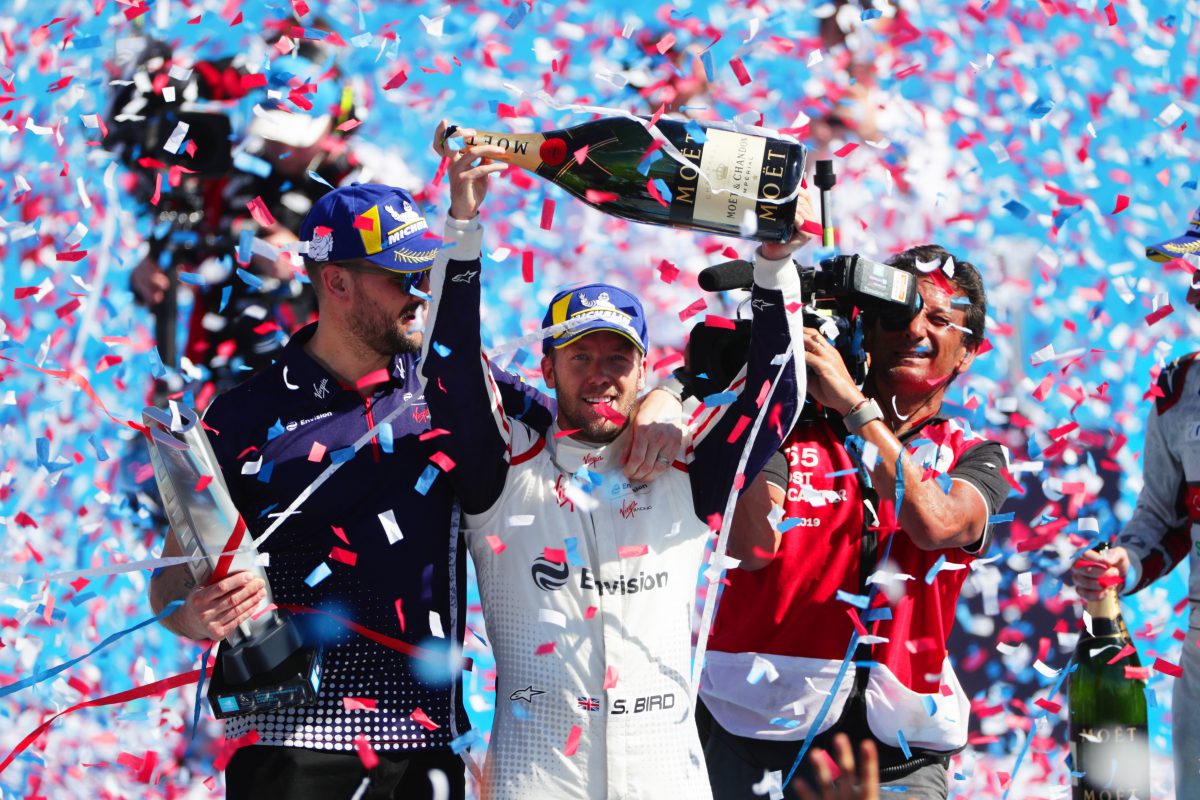 British racer Sam Bird stayed cool during today’s sweltering Formula E race in Santiago, Chile, to take victory and move him and his Envision Virgin Racing team into first place in both the drivers’ and teams’ championship. With air and track temperatures pushing 37°C and 44°C respectively – officially the championship’s hottest ever race – Bird, 32, drove superbly from fourth on the grid to take his eighth career victory and the first win of the new Gen2 era for the team and its Audi e-tron FE05. The result also means he, and his team, continue their impressive record of recording victories in every Formula E season to date.

Meanwhile, team-mate Robin Frijns, 27, drove an equally superb race making up 10 places to finish fifth and secure yet more valuable points for the team, with the Dutchman now lying in fifth place in the championship standings.

The all-electric event in the Chilean capital marked the second consecutive race there, albeit on a new 2.348km circuit located in Parque O’Higgins. With the team’s expectations high after a double podium last time out, the day began well with both Bird and Frijns showing strong pace in both the morning practice sessions.

Come qualifying, Frijns was placed in the first group and, like those around him, struggled to get a good lap as the track continued to improve throughout the session meaning he would eventually start P15. Bird, on the other hand, made the most of his qualifying group to make it through to Superpole and despite ending sixth, two infringements for other drivers meant he would begin the 45-minute (plus one lap) race from fourth.

As the race got underway, managing battery and tyre temperatures would prove to be key. On the opening lap, both Bird and Frijns made up ground and, by the halfway stage, Bird was lying second with his team-mate already up to seventh.

In the second half, Bird was all over the back of leader Sebastien Buemi forcing the Swiss driver to go defensive. Then with 10-minutes left on the clock, he made a mistake at the chicane, clipping the wall on the exit and allowing Bird to take the lead. Bird still had a lot of hard work to do in keeping Pascal Wehrlein at bay, but his experience showed through to take the chequered flag. Just a few places further back, Frijns was also being made to work in the mid-pack with some very close and frantic racing, but he held his nerve to secure another strong result and points haul.

Bird, who has now competed in all 48 Formula E races for the team, said: “That was a great, but challenging race! No-one really knew going into this race how the battery and tyres would react in these extreme temperatures. The whole race we were going into the unknown. But to get the result we did is fantastic, and my thanks goes to everyone at Envision Virgin Racing for once again putting in the hours to give us this win. It’s been a steep learning curve for the team, with the limited testing we’ve had, so to find ourselves in a situation where we’re winning races – to go with pole positions and podiums from previous races – is an incredible achievement.”

Frijns said: “Starting towards the back of the field was always going to make things tougher but we fought hard from the off and managed to gain some good ground early on. Towards the end I was really in the thick of it, but we came away with another strong result for me and the team.”

Sylvain Filippi, Managing Director at Envision Virgin Racing, said: “After the success of our double podium at the last race, it’s an amazing feeling to come here to Chile and go even better. The whole team, as always, put in a huge effort to prepare for this race and that hard work clearly shows in the results today. I’d also like to thank the whole Audi Sport team for their contribution to this result.” He added: “The high temperatures were always going to make the conditions tough, but Sam and Robin drove superbly, and we now head to the next race in Mexico full of confidence.”

Envision Group’s Franz Jung and Chairman of the Board added: “It’s great to get our first victory of the season. To keep improving and finding the pace race-by-race is a credit to the team and I’m super proud of Sam and Robin.”

The next Formula E round takes place in Mexico City on February 16.