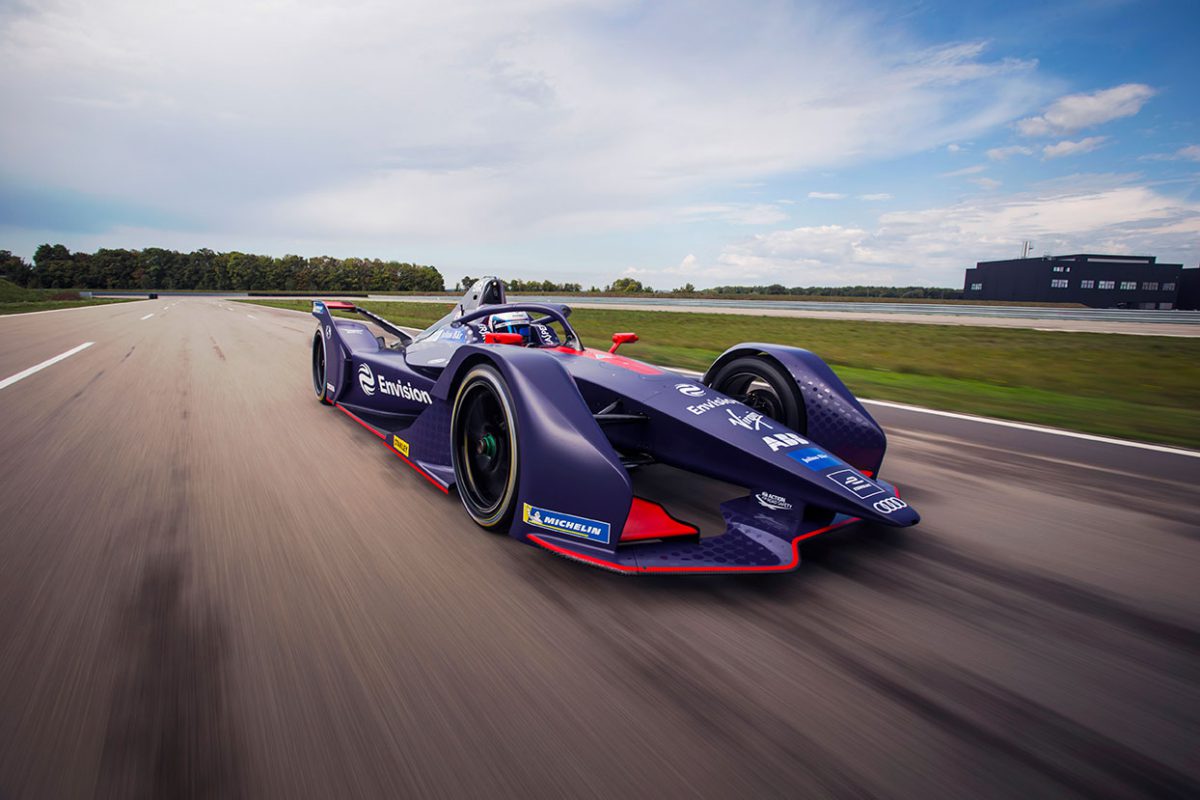 Leading global digital energy company Envision Group, creator of the breakthrough Internet of Things (IoT) platform EnOS™, will join together with founding Formula E team Virgin Racing to become Envision Virgin Racing from the upcoming fifth season of the all-electric race series. Preparing for the season ahead, the team unveiled a fresh identity, alongside its all-new Formula E car and a strong driver line-up of Sam Bird and Robin Frijns during a launch event on 5 October.

Choosing Energy Efficiency Day as a symbolic date for the team’s launch, Founder and CEO of Envision Group Mr. Lei Zhang made the announcement at the team’s state-of-the-art and sustainably-friendly headquarters at Silverstone Park, in front of specially invited guests, partners and media.

The news also marks the next chapter in the team’s long-term collaboration with Envision Group following the announcement earlier this year that it has become the majority owner.

Envision Group is committed to the supply of clean, secure and affordable energy through its smart energy products and services and EnOS™ operating system, the world’s largest IoT platform. Connected to more than 100GW of energy terminals and 50million smart devices worldwide, EnOS™ is at the centre of Envision Group’s aim to build an energy eco-system.

Addressing the large gathering of media and guests at the event, Lei Zhang offered these words ahead of the new season: “We are incredibly excited to witness the Envision Virgin Racing team enter into the fifth season of Formula E. By taking part in this rapidly expanding racing series, we are provided with a format that allows us to share our enthusiasm for innovative technology, elegant design, smart mobility and high speed while showcasing the pure power of clean energy. Virgin Racing’s on-and-off track achievements in this championship so far have been extraordinary and we hope that the new Envision Virgin Racing Team, united by a shared passion for sustainability and motorsport, can continue building this team’s impressive legacy.”

Mr. Zhang added: “The team will be guided by Mr. Franz Jung, the Vice President of Envision Smart Mobility and the Chairman of the Board of Envision Virgin Racing. With his rich experience in automotive industry as a former senior executive of German premium brands, I’m confident in the team for the coming season.”

Hosted by TV personality Vernon Kay, the live event also saw the race team’s Managing Director Sylvain Filippi take to the stage to discuss its new direction and ambitions for the season ahead, together with a Q&A with Dieter Gass, Head of Audi Motorsport.

The team’s fresh livery was revealed by Lei Zhang and drivers Sam Bird and Robin Frijns. Sam Bird, 31, remains part of the team for a fifth consecutive season, having competed in all 45 Formula E races to date. He is one of only two drivers to have won in every season of Formula E, notching up an impressive seven wins and 15 podiums, completing his best season so far with third place overall earlier this year.

Meanwhile, Frijns, 27, raced in seasons two and three of the all-electric championship, securing a podium in his second ever race. Like Sam, the Dutchman brings with him a long and successful motorsport pedigree, including winning the Formula Renault 2.0 and 3.5 titles in his debut season, as well as racing in DTM with Audi Sport, winning in GP2 and testing for both the Sauber and Caterham F1 teams. For this season, Bird will continue to race under his usual number #2 banner, with Frijns opting for number #4.

Sylvain Filippi, Envision Virgin Racing’s Managing Director, said: “We’re delighted to be collaborating with such an innovative, like-minded and sustainability-focused company like Envision Group. For us, Formula E has always been more than just a racing championship, it’s a chance to be truly innovative and help accelerate change towards a better future. As such, we’ve always been passionate about addressing the wider environmental issues and the reasoning behind our Race Against Climate Change programme. Now with Envision Group onboard, we feel we can strengthen this message even further.” Adding: “As well as Envision Group, I’d like to personally welcome Robin to the team, as well as thank Alex Lynn for all his hard work behind the wheel last season.”

Sam Bird said: “It’s great to be remaining with the team for a fifth season. The relationship we have developed over the last 45 races has been incredible and I’m excited to see it continue to strengthen. Season five is a new era for every team – with the introduction of the Gen2 car – but particularly for us, as we are now joined by Envision Group. The team has worked tirelessly over the summer and are ready to return to the track for pre-season testing.”

Robin Frijns added: “I’m very excited to be returning to Formula E with Envision Virgin Racing. It’s great to be joining such a strong team and with the work we’ve already completed, it’s clear we have a very good package. The live event at Silverstone has showcased all that the team can do and it’s great to be a part of that. We now look ahead to pre-season testing, where we’ll be able to better gauge our on-track performance.”

The 2018/2019 FIA Formula E Championship begins in Ad Diriyah, Saudi Arabia, on December 15, with pre-season testing beginning on October 16 in Valencia. The new season also marks a new era for Formula E with the Gen 2 cars now boasting almost double the energy storage allowing them to complete the entire race distance, bringing an end to the previous car changes. The power output has also been increased by 50kW (equivalent to 67hp), highlighting the advances in technology in just four seasons.

For more information on Envision Virgin Racing, including access to the team’s media site, visit www.envision-racing.com

Tyres:
Bespoke Michelin Pilot Sport 18in tyres for both wet and dry conditions

Brakes:
Brembo package with brake-by-wire at the rear