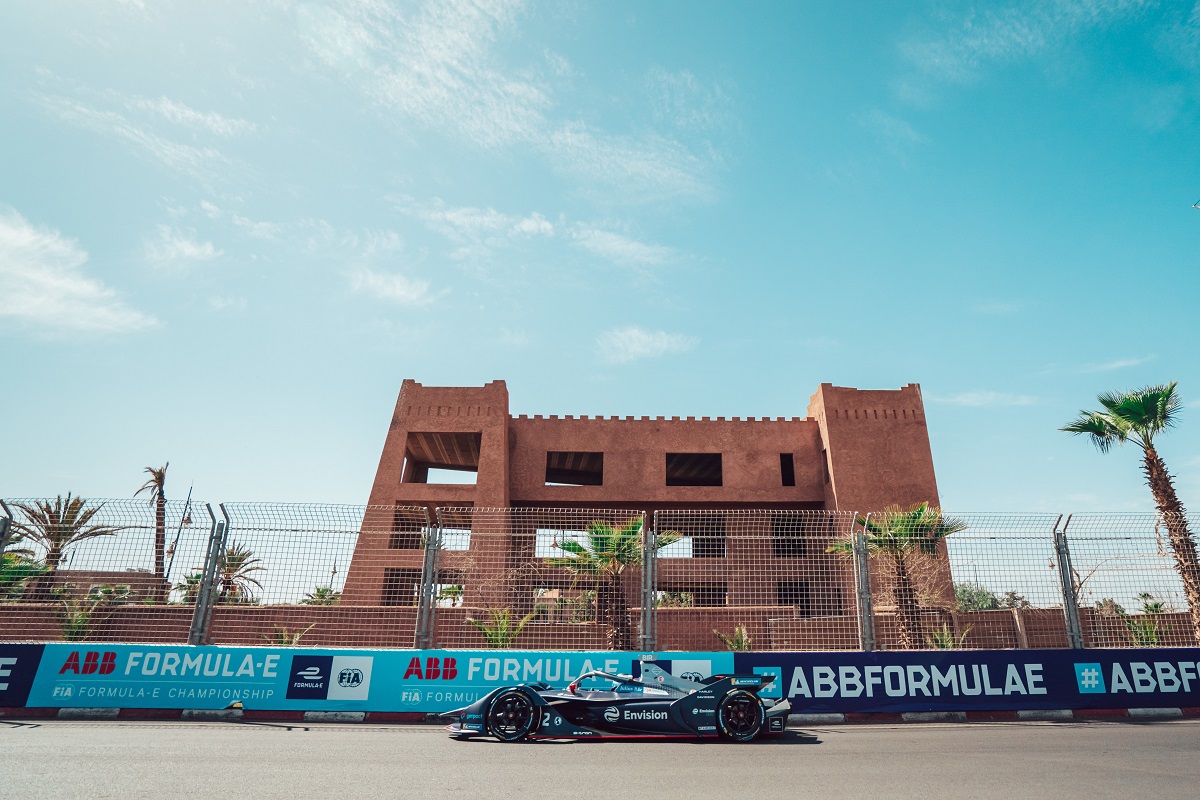 Envision Virgin Racing finished in the points at today’s Formula E Marrakesh E-Prix – following a turbulent start to the season for the team – as Briton Sam Bird moved into a point scoring position during the closing lap of the race.

An incident-free opening lap saw both drivers make their way up the pack from their starting grid positions, with Bird beginning in P14 whilst team-mate Robin Frijns started in P22 – following a penalty for an over usage of power during an incident in qualifying.

Making up 10 places during the race Frijns showed, once again, his overtaking prowess and finished the race in P12. Meanwhile, team-mate Bird crossed the finish line in the points, having battled his way to 10th place on the final lap of the race.

Ahead of the race, Bird met British singer Ellie Goulding in the Envision Virgin Racing garage to explain the importance of Formula E in electric vehicle development and the team’s Race Against Climate Change initiative before she headed out on a test lap of the Marrakesh circuit.

“It’s been another difficult weekend, I can’t say I’m happy to come away with one point but it’s important that we have shown we have the pace and the ability to move forward in a race. After Robin’s incident in qualifying, the guys did a great job to get the car fixed and ready for the race – the penalty he received was unfortunate but not something that we could have controlled. Both drivers fought really hard today to make their way forward and there’s nothing more they could’ve done. I’m confident we can return to our true form next time out in Rome and we’ll be working hard in the meantime to make sure we’re in a really strong position ahead of that race.”

Bird, 33, said: “It’s good to be back in the points today but I think we could’ve been further up if I’m honest. We showed we had the pace but there were a few scrappy moments in the race that meant I dropped back a few places. The team have done a great job this weekend and the car has been fast, I just couldn’t get any more out of it for qualifying and ultimately starting group one means that you have to nail your flying lap. I hope the fans have enjoyed the race today – especially the UK fans who were able to watch live on the BBC – and we’ll be looking to come back stronger again in Rome.”

Dutchman Frijns, 27, added: “Today has been tough, I touched the wall in qualifying which compromised my lap and then I was penalised for an over-usage of power linked to the crash. It’s hard starting near the back and fighting your way forward, especially as we know we’ve got the pace to be out at the front, but I made up 10 places in the race and I’m happy with my performance today. I want to thank the team for putting in a huge effort to get my car fixed before the race started and supporting me throughout the weekend. We’ve got a bit of a gap until the next race now in Rome so I’ll spend some more time on the team’s Silverstone simulator and make sure I’m as prepared as I can be before the next race.”

The sixth round of the ABB FIA Formula E Championship will take place in Rome on Saturday, 4 April. Meanwhile, tomorrow, the team is back in action with the official Formula E rookie test with drivers Nick Cassidy and Alice Powell at the wheel.