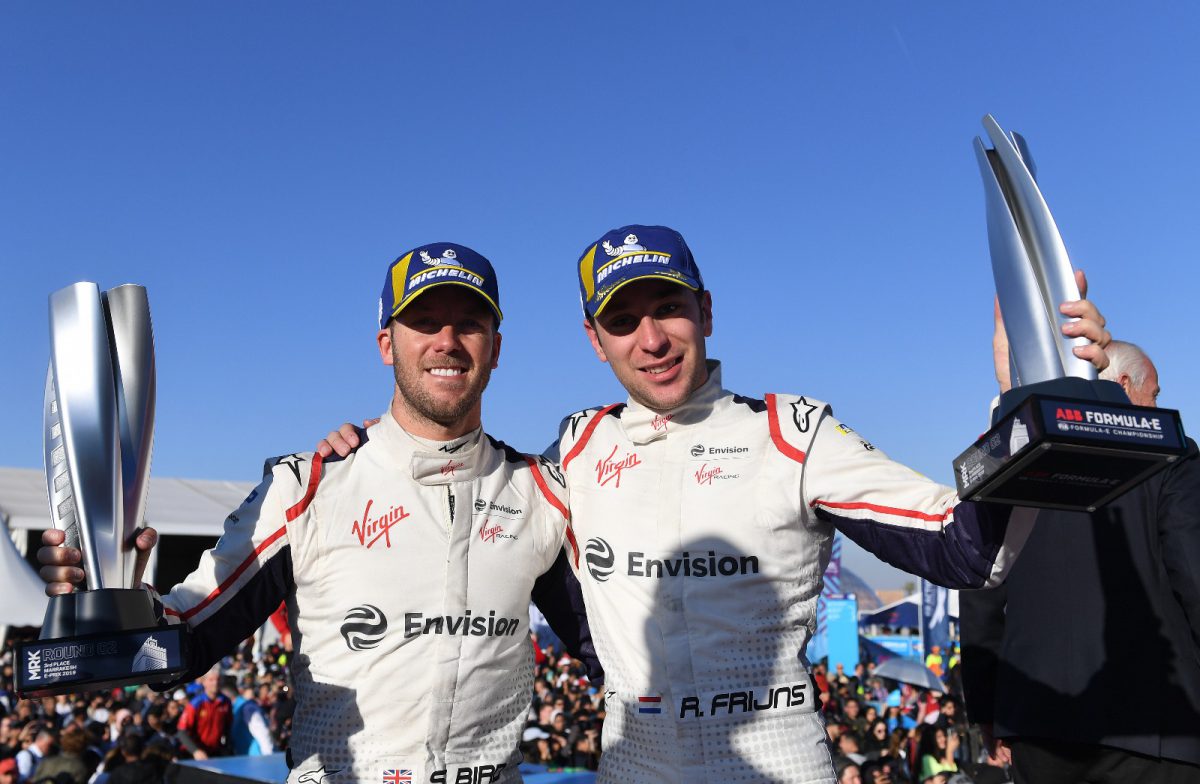 Envision Virgin Racing secured an emphatic double podium during today’s nail-biting Formula E race in Marrakesh, with Robin Frijns missing out on victory by a mere 0.143s – the championship’s narrowest ever winning margin – to earn him his best ever Formula E result. Meanwhile team-mate Sam Bird, who earlier secured his fifth career pole after an incident-packed qualifying session, finished just behind the Dutchman to complete a strong points tally for the team, moving them up to fourth in the standings, with Frijns and Bird now fifth and sixth in the drivers’ championship.

After topping the timesheets during last month’s in-season test in Ad Diriyah, expectations were raised heading into the race weekend, held at Morocco’s Circuit International Automobile Moulay El Hassan. The team – who are majority owned by the Envision Group – were not to be disappointed as Frijns finished the opening practice session on top, with Bird just behind in third.

Their strong pace behind the wheel of the Audi e-tron FE05 continued into the second practice session with Frijns ending P5. However, a water pump issue for Bird curtailed his session and now meant the team had a race against time to replace the whole of the rear-end of his car before the start of qualifying. A huge team effort meant they did so with eight minutes still to spare, with Bird rewarding their hard work by finishing qualifying P1 and Frijns a few places further back. There was still drama to come following a bizarre pitlane accident as Tom Dillmann reportedly lost his brakes heading into the parc ferme queue and struck the back of Frijns’ car, who subsequently nosed into the rear of his team-mate. This meant Bird entered Super Pole with an off-kilter rear diffuser, but the Brit responded superbly on the final lap of the top-six shootout to claim the top spot.

Come the race, poleman Bird was instantly under pressure from Jean-Eric Vergne, with the Frenchman hitting the back of his car in a very ambitious move to gain the lead but instead sending him into a spin. With the two Andretti drivers of Antonio Felix da Costa and Alexander Sims now behind him, Bird had his work cut out keeping it that way, but it wasn’t long before they were both able to find a way passed, dropping him to third ahead of Frijns who had moved up to fourth.

At the halfway stage of the 45-minute race, Frijns was now ahead of Bird with a charging Jerome D’Ambrosio also getting ahead of the pair for them to lie fifth and sixth respectively. The next few laps saw frantic racing as the front runners battled for a podium spot until with 10 minutes to go, the two leading Andretti cars collided into one another in a dramatic twist to an all-ready frantic race.

That brought out the safety car and when racing finally resumed, there was just time for one more lap resulting in an all-out sprint for the chequered flag with the now leader D’Ambrosio just able to hold off Frijns from Bird.

“It was an exciting race for me and for those watching at home!” said Frijns. “The start was a bit messy as I tried to avoid everyone from [Jean-Eric] Vergne’s spinning car. I then found myself in P4 and having a good gap to Jerome [D’Ambrosio] behind me, whilst trying to save as much energy as possible. Of course, everyone knows what then happened to the two cars ahead, and then on the final lap I tried hard to push Jerome but being in this position for the first time I knew the points were more valuable then potentially not finishing the race, so to finish on the podium is a really good way to end the day for me and the team.”

Bird, who is now one of the all-time Formula E points scorers with 21 podiums to his name, said: “I didn’t know too much about the move from Vergne at the start and from there on I suspect it may have caused a slight issue with the car as we didn’t have the pace we’d seen earlier. Nevertheless, it was an amazing result for the team and we did a great job in qualifying, and that’s down to the hard work and effort by everyone.”

Envision Virgin Racing’s Managing Director Sylvain Filippi said: “We came into this weekend knowing the pace was there so it’s great we’ve been able to show our true potential and great to achieve the first podium of the season for Envision Virgin Racing and for Audi Sport. The effort from the whole team has been huge from the prep done beforehand, to the rapid work done to get Sam out for qualifying, and right through to the chequered flag. This weekend we’ve also had representatives from Envision Group, as well as our partners, so for them to celebrate this result with us is a fantastic way to round out the event.”

Envision Group’s Franz Jung and Chairman of the Board, who was on site to support the team, added: “That was a hugely entertaining race and my congratulations go to Robin and Sam, as well as the entire team for their hard work today. We’re already looking forward to the next race in Santiago.”

The next Formula E round takes place in Santiago, Chile on January 26