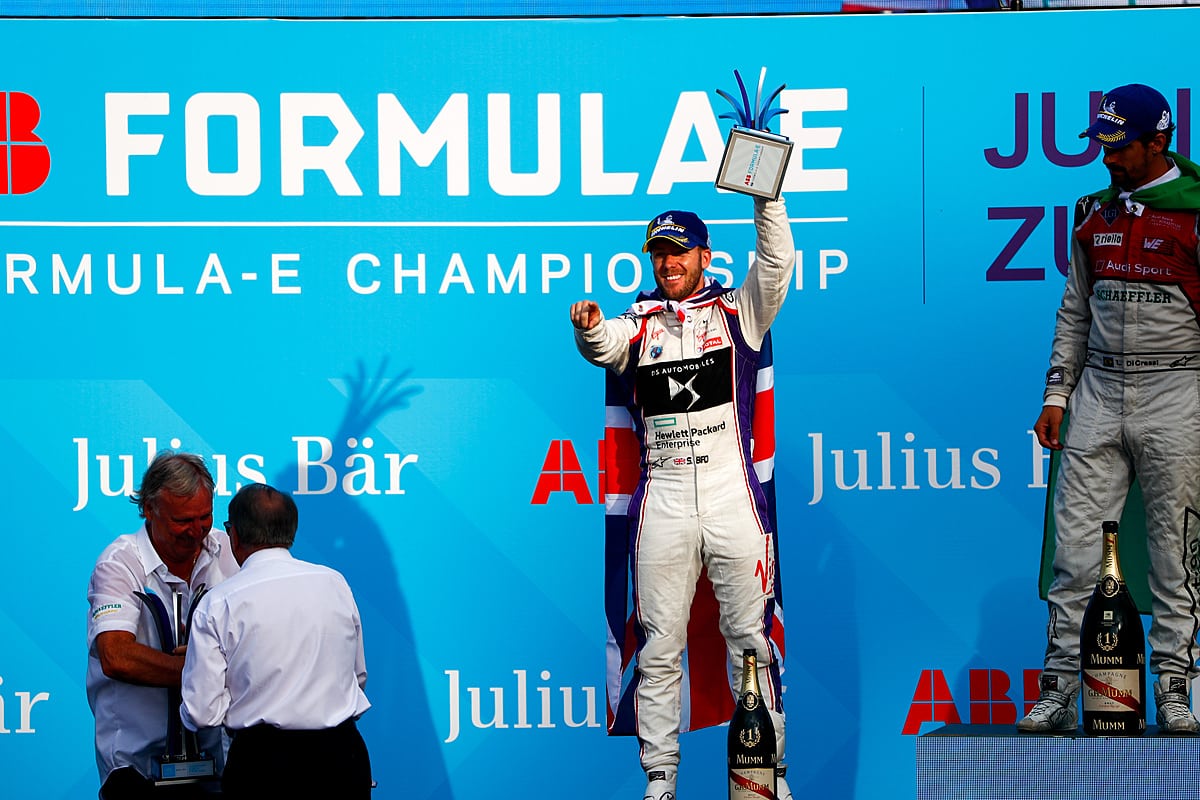 BIRD CLOSES IN ON TITLE HUNT WITH PODIUM IN ZURICH

The result sees the British racer close the gap to 23-points, with just the final two rounds in New York left to play out – an event Bird took a clean sweep in last year. It also sees his Virgin Racing team remain in contention for both titles.

After a strong qualifying performance earlier in the day, Bird lined-up third and battled hard throughout the early stages of the race to remain amongst the front runners, with his title rival back down in the midfield. Then, just before the halfway mark, a Full Course Yellow period – following an incident with Vergne and Felix Rosenqvist – led to a flurry of drivers head to the pits to change cars.

Bird emerged fifth and keen to push on with Vergne down in ninth. Then, Vergne and four other drivers were penalised for speeding during the FCY and each handed drive-through penalties. That allowed Bird to move into second place, just behind race-leader Lucas di Grassi, and go on to cross the line to secure his 15th Formula E career podium.

Bird said: “We had a little bit of luck today but even so the whole team did a fantastic job to get the result and leave in this position where we’ll be fighting for the title in New York…and we know what happened there last year! Now I know what we need to do; I need to beat him [Vergne] in the first race, and if I can do that then we have a shot at the title.”

Meanwhile team-mate Alex Lynn, endured a frustrating afternoon despite showing front-running pace. A suspected battery sensory issue in his first car saw him forced to pit early after running P12. That meant he had to run a 23-lap stint in his second car, and with energy management to consider, was only able to finish 16th.

“It’s been a really frustrating result today and I think we were robbed of a strong points finish given the pace we had,” said Lynn. “We’re not sure exactly what the problem is at this stage, but for sure we’ll go away and analysis it and ensure we do the best job we can in New York to support the team.”

Sylvain Filippi, Chief Operations Officer, said: “To be in this position heading into the final two rounds is a fantastic achievement by the whole team. To close the gap today means we’re in real contention for both the drivers’ and the teams’ championship and for sure we’ll be putting every effort into New York.”

DS Performance Director Xavier Mestelan Pinon added: “It’s been a very positive weekend for us with a podium for Sam and 17-points taken from Jean-Eric Vergne in the drivers’ championship. The last two races will be in New York where we won both races last year. It is clear that the whole team will make the trip with great expectation.”

The next and final two Formula E races of the season take place in New York City on July 14/15.